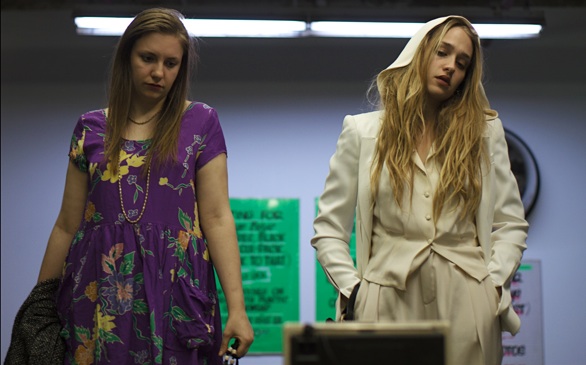 Lena Dunham writes, directs and stars in Tiny Furniture, a tale of post-college life in New York City. Dunham plays Aura, who, days after graduating with a film theory degree, comes home to her mother’s high-end Tribeca loft exhausted and unsure of the next step. She falls back in with her old school friends, including the glamorous and spoiled Charlotte (Jemima Kirke). When Aura’s mother and sister leave town for a college tour, Aura falls in deep with her old crowd, partying with Charlotte and letting video-maker Jed (Alex Karpovsky, whom she has just met) sleep in her mother’s bed.

A film of the indie persuasion, Tiny Furniture is an example of what happens when you graduate college and go back to your hometown – there are old friends around who did not leave after high school and are in a similar place emotionally to where you left them four years ago. In some cases, you wanted to leave these people behind. Especially in Aura’s case, her old friends are creepy. Even her successful mother and obnoxiously ambitious sister are creepy. I feel for Aura because she has no local friend who is a real, productive adult who can help her through her post-graduation depression.

Dunham’s representation of post-college life is very honest, which endears the viewer. There is something very relatable to getting a degree in film theory and having only enough skills to get a crappy job as a restaurant hostess. People always say that you can find yourself in college, but sometimes it takes getting out of that safe environment to really find yourself.

And it can take years, which Dunham takes into account: The story encompasses only two weeks at the most, and the film closes on the lowest point for Aura. She has pushed away her only real friend from college, she quit her job, she got used by a guy and now she is curled up in her mother’s arms. This is realistic, because it wouldn’t make sense for Aura to have it figured out so quickly.

This moment is probably honest for Dunham as a filmmaker as well. She’s still figuring out her life, and this film is a way for her to creatively express that. As a graduate of film theory myself, I can say job well done. But what’s next?