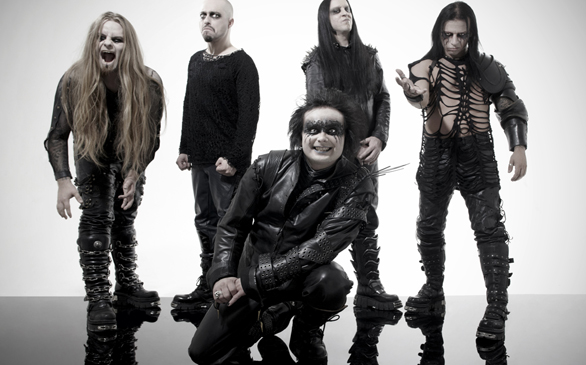 Step inside a haunted black mass ruled by Lilith, the headstrong sinner from the Garden of Eden who transforms into a bloodthirsty demon ready to stir havoc among the men who dare defy her. It’s the spine-tingling tale told in Darkly, Deadly, Venus Aversa, the new album by Britain’s legendary metal band Cradle of Filth.

Led by wild-eyed frontman Dani Filth, whose vocals are certain to be blessed by a thousand banshees, Cradle of Filth’s new release is an epic horror opera that’s more nerve shattering than any possession. Unlike their past collections, all odes to the damned, Cradle of Filth’s debut under UK independent label Peaceville Records is stripped down to the bone, revealing the raw, flesh-curdling story of a succubus ready to attack listeners with her “sweet seduction.”

While Filth’s signature vocals have calmed down from his shrieking times, Darkly, Deadly, Venus Aversa is a soul-shaking orchestra of sinister pianos, thunderous choirs, dark Victorian poetry and an assault of guitars climaxing to an end that may prove too terrifying for anyone with a weak heart to discover. Simply put, Darkly, Deadly, Venus Aversa is another nightmare you’ll enjoy having.