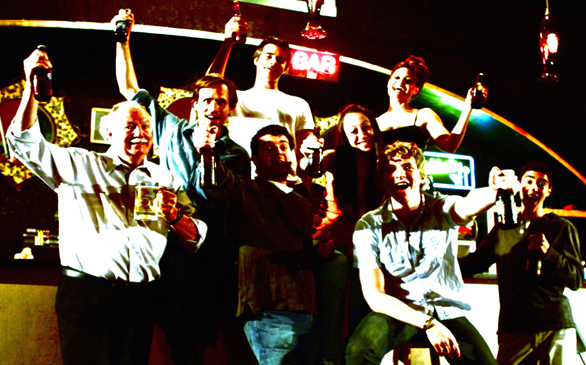 There’s a lot going on at the Dragonfly these days. In fact, the venue could be hailed for bringing rock and roll, underground, DIY theater back. Someone from Funny or Die was recently spotted in the audience of "Point Break LIVE!" Add that to the list of stars – Jessica Alba, Jason Schwartzman and Gary Busey – who have shown up for Thomas Blake’s smash show, currently running Saturday nights at Dragonfly.

The huge triumph of keeping “Point Break LIVE!” alive for three years inspired Blake and “Rules of Engagement” writer Lance Whinery to create “Drunk Talk,” which has been brought back by popular demand. Another interactive theater piece, this time the Dragonfly is the backdrop for the farewell party for McSwiggin’s. The beloved local bar is closing and everyone has gathered to say good-bye. The cast includes Tobias Jelinek from “Point Break LIVE!,” “Saturday Night Live” writer Danielle Kasen, David Alfano and Steven Sears from L.A.’s Second City, Greg Hoyt from L.A.’s Upright Citizens Brigade and Christi Waldon, the popular PA from “Point Break LIVE!”

The real-bar environment turns into the scene of a wacky comedy, keeping the audience guessing as the cast members emerge out of the crowd. At one point, a cast member even buys a round of drinks for everyone in the bar.

The awesome aspect of interactive theater is that the cast has to adapt as an ensemble, Jelinek explains. In both “Point Break LIVE!” and “Drunk Talk,” there are surprises, and that’s what keeps the theatrical experiences so fresh and exciting. Jelinek continues, “We are able to take more risks.”

While “Drunk Talk” begins at 8 p.m. every Sunday, it is preceded at 6 p.m. by “Roccopella,” a raucous one-man musical comedy written and performed by George Spielvogel, another star of “Point Break LIVE!”