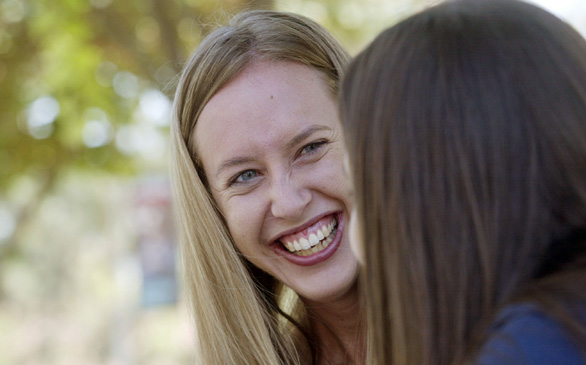 Talking about depression and suicide with someone can help.
(Credit: Darrell Wong/Fresno Bee/MCT)

When I was a Freshman at UC Riverside, I remember that there were two students who committed suicide. One person during winter break, and another had reportedly suffocated himself to death when his roommate found him. On a trip to NYU, my friend took us on a tour around campus.

“See the windows,” he said, “they’re only allowed to be open that much to prevent people from jumping.”

That crack in the window was large enough for a small bird to land on. In fact, all the buildings surrounding NYU have a safegaurd of fences that kept students from jumping.

Earlier this year, national media attention centered on Rutgers freshman Tyler Clementi, whose final Facebook post simply stated, “Jumping off the gw bridge sorry.” He had no one to talk to and nowhere to go, so he jumped.

His story of public humiliation and its tragic effects have sparked various debates, including suicide amongst college students. The American Foundation for Suicide Prevention reports a national average of 7.29 suicides for every 100,000 students. Earlier this year, there were six suicides in six months at Cornell University, and Cornell has less than 20,000 students. So why talk about suicide? Because it’s such a hot topic? No, it’s because no one wants to talk about it.

The only comfortable way of talking about it is through emotionally distant objective rhetoric of statistics or through small talk where we say, “Yeah, that’s a tragedy,” and move on to the next topic. It is a subject that needs to be talked about openly and with understanding, an understanding that college is a pressure cooker where feelings of isolation and anxiety over money and the future can cause any student to feel the need to just say, “Fuck it.” But they say it quietly, to themselves, while everyone else continues on with their own problems and worries. The social taboo of suicide means you’ve gone mental, and it’s handled with a type of uneasy caution because people are either too uncomfortable to talk about it or they just don’t know what to do. In fact, suicide is a phenomenon of silence.

A University of Texas study of 26,000 college students from 70 universities found that 18 percent seriously considered suicide, but only half of those students are actually telling anyone about it; this ranges from talking to close friends to seeking professional help.

The funny thing about this finding is that talking about it usually helps (I know), but it’s one of the hardest topics for anyone to understand. Various public and private universities have acknowledged this, and there are several programs already established, and for which you have already paid for. I know UCLA Counseling and Psychological Services offers any student registered with the university up to 10 sessions of psychological and psychiatric services. If you take the school’s insurance, the services are prepaid. When I used this service, my therapist was at the last stage of his medical internship before getting his master’s degree. In my head, I thought that not being with a professional meant I was missing out in some way, but because there was something at stake for him and he was new to it all, I felt that the level of care was genuinely higher, and that he really wanted to understand and help. I could have opted out and received someone with the initial Ph.D., but I didn’t care whom I spoke to at the time. I just needed to someone to listen. USC offers a similar service to anyone registered as a student.

I had to talk to a lot of different people to find someone that was a right fit for me to talk to. Some scoffed at my problems or just kept quiet. Some people just really can’t relate to you, while others can; and it can be anybody from a friend to a co-worker who won’t judge you. Talking about it helps. Schools understand how hard it is being a student and their programs are specially tailored to understanding student mental health. Even if you opt out of receiving professional help, find someone to talk to. It’s not just your life you’re affecting. Like my experiences at UCR and NYU, it can be a total stranger’s. And don’t only talk, but also listen to your friends. It just might be what they really need.