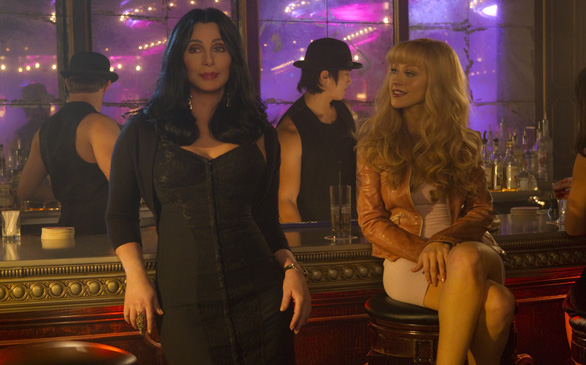 When she walks into a suite at the Four Seasons Hotel on a Sunday afternoon in November, a black sweater studded with gold sequins wilting off her milky shoulder and skin tight black pants revealing the body of a 20-year-old, the entire press corps takes a collective breath and sighs lovingly, “Cher.”

Ladies and gentlemen, we are in the presence of greatness.

Considering this is the woman who played God on “Will and Grace,” it makes sense that she’d be taking a break from her blockbuster Las Vegas show in order to promote Burlesque, her return to the big screen after a six-year absence, a film her co-star Stanley Tucci calls, “Gay Fantasia.”

Directed by Steve Antin, brother of Pussycat Dolls founder Robin Antin, Cher co-headlines Burlesque with Christina Aguilera, who makes her big-screen debut as Ali, a small-town girl with a big time voice who moves to Los Angeles in hopes of becoming a star. Taking a page from the Coyote Ugly playbook, Ali gets a job as a cocktail waitress at the Burlesque Lounge, a once resplendent nightclub that’s now ailing, and falls under the tutelage of the owner, Tess (Cher), and her rapier-witted stage manager (Tucci, who could read the phone book and be compelling) once they discover her incredible abilities. It’s a lush, beautifully photographed movie musical filled with show-stopping song-and-dance numbers that call to mind films like Gypsy, Chicago, La Cage aux Folles and even Showgirls (in the funny, campy way minus the sleaze).

Asked why she stepped away from an acting career that earned her wide critical acclaim for iconic roles in films like The Witches of Eastwick, Mask, Silkwood and her Oscar-winning turn in Moonstruck, Cher takes a pull from a Big Gulp-sized iced coffee, shrugs and says simply, “I forgot. Nothing came to me that I liked, except a part in Mamma Mia!, which I was on the road and couldn’t do. I’ve been busy. It’s not like I’ve been a shut-in, but I forgot that I like acting so much.”

Effortless and charming, Cher’s performance is also a reminder of just how talented she is. According to Aguilera, Cher’s professionalism and level of performance were the best on-set learning tools she could have asked for on her first film.

“Cher; what better person to learn from?” Aguilera smiles. “And she is just as good, if not better, in her off-camera moments. She really pushes the other person’s buttons to make them react and make them even better than what the dialogue calls for. She makes it easier for the other [actor].”

In response, Cher praises her co-star’s transition from singing superstar to actress.

“She was nervous, but she held herself well. I’d be frightened too, to walk onto a set where you’re starring in a movie and you don’t know what to expect. I think she did a great job of not being so nervous that it diminished her performance.”

Aguilera admits that she wasn’t always confident and assured. After years of being asked to appear in different films, she says she waited until the right project came along because she “wasn’t going to do a movie just to say I did it. I wanted to really believe in something and feel passionate about it.”

First approached by the studio, she liked the idea of a burlesque movie but wanted to see changes made to the character.

“It just wasn’t something for me,” Aguilera explains. “[Ali had] no backbone, no bite. She had to have more drive, more passion. They rewrote her and I think they made her into more of a fighter for me,” she says, unwittingly name-checking her own 2003 hit single. Meeting with director Antin, who used things like Caravaggio paintings and Ellen von Unwerth photography to convey the visual world he planned on creating, sealed the deal.

“Burlesque can be presented in many different ways,” Aguilera continues. “He’s a big Fosse fan. He was inspired by Cabaret [and] Liza Minnelli; I knew Steven would do it in a classy, elegant way.”

Asked if Burlesque will be her big screen swan song or just the beginning of another long string of exceptional performances, Cher shares a bit of her life philosophy.

“I don’t believe the word no,” she says. “No is a bullshit word that someone made up. I think if you’re an artist, you just don’t care. And if you’re a regular person, you try to care less.”