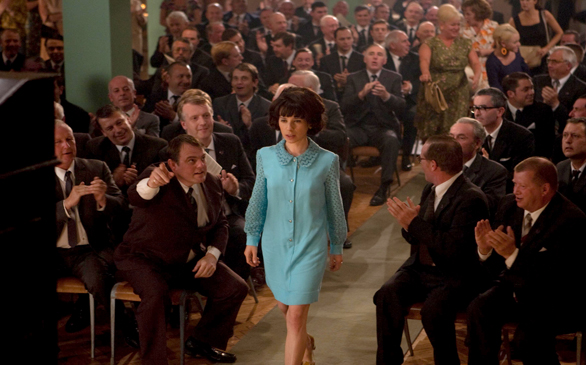 When looking at the 1960s with a nostalgic eye, it’s easy to glamorize the decade, wishing that one could go back to the fashion, music and progressive attitude that we associate with that time. Who wouldn’t want to rock out to the Rolling Stones while rocking the London mod look? But as Made in Dagenham shows, the standing of women in the 1960s would shock any modern woman, working or not.

Based on a true story, the film outlines the struggle of British female workers in a run-down Ford factory in the suburb of Dagenham to first be classified as skilled workers (They meticulously sew all the seat upholstery for cars made in the factory.) and then to earn equal pay with men. Rita O’Grady (Sally Hawkins), a young mother, leads her fellow factory girls, and then women across the labor union, to strike after a meeting with company heads causes her to snap out of her usually quiet demeanor to stand up for the level of skill required to do their work. The women eventually get an important ally in Secretary of State for Employment and Productivity Barbara Castle (played as a posh ball buster by Miranda Richardson), who eventually helps get an equal-pay act signed into law in 1970.

As I mentioned before, it’s always interesting to see a representation of a past decade that takes into account the real social standing of women. It’s sometimes difficult to get out of our modern way of thinking about gender status. And that can sometimes extend to film as well, so it’s refreshing but also horrifying to see how women were actually treated in the so-called “free-thinking” ’60s.

The working class women of the time were expected to be full-time mothers but also bring in income, even though their husbands fancied themselves the “breadwinners” of the family. Women were not allowed to be as good or – God forbid – better at anything than men outside the home. Even wealthy, educated women (as represented by the wife of a Ford higher-up, played by Rosamund Pike) are treated as idiots and end up serving food for the husband and keeping their mouths shut.

Fun, passionate, full of 1960s fashion, girl power and great performances, Made in Dagenham is a delight, even as the female characters are put down. They fight for their rights to be taken seriously. Fight on, sisters.

Made in Dagenham releases in select theaters Nov. 19.