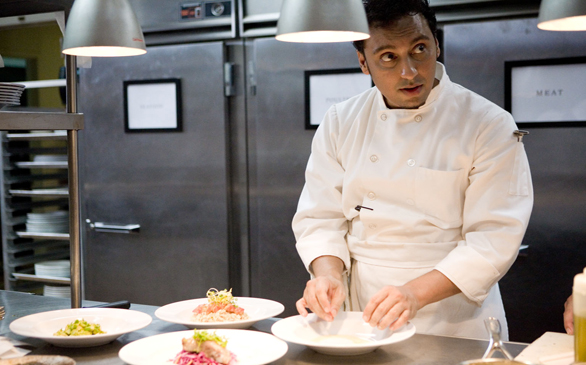 In Today’s Special, writer-comedian Aasif Mandvi stars as Samir, a sous-chef in an upscale Manhattan restaurant working toward a promotion as the head at a new restaurant. Then two things happen: A younger and more talented chef gets the job, and his father has a heart attack and becomes bedridden. Samir then has to help run his father’s failing Indian restaurant and in doing so, finds his passion and talent for cooking Indian fare with the help of a mysterious cab driver (Naseeruddin Shah).

Being a correspondent on the always funny “The Daily Show,” one might expect this film to be a laugh riot in which every moment in the story is ripe for derisive commentary. Instead, the movie is a more gentle comedy of circumstances and the reluctant hero who is faced with them. And I think it is a better movie for it. What Mandvi does bring from his television post is a straight-faced character, someone who can be a hard worker but is mainly just dealing with an environment of goofy characters.

Samir resists the changes that are happening to him, so the film feels a little slow because we know where he will end up (turning the restaurant around), but he takes a while to become proactive enough to make it happen. Again, this ended up fitting the tone of the film, which was different than my expectations.

The cinematography really heightened the disparate kitchens Samir works in: the gleaming white of the upscale restaurant and the grimy, turmeric-smeared hole of the Indian restaurant. But when those Indian spices come out, the colors are vivid and really give a feel for one of the best aspects of Indian food: the vibrant flavors.