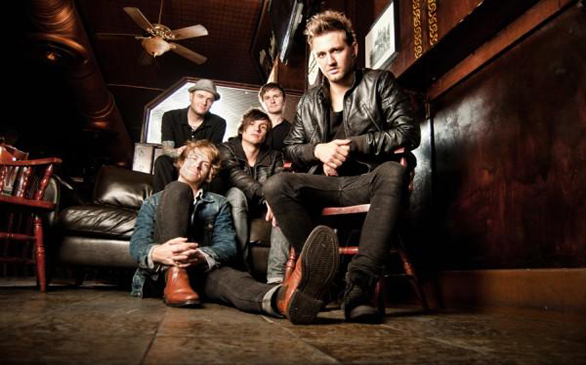 The members of Every Avenue have a lot to be stoked about these days. Each tour they’ve done has been bigger than the last (including a headlining outing this year), last year’s Picture Perfect album was some of their best work yet and it seems the Michigan pop-punk natives are finding themselves more recognizable in public than ever.

That said, bassist Matt Black, guitarists Jimmie Deeghan and Josh Randall, vocalist Dave Strauchman and drummer Dennis Wilson are still their own worst critics, even amid their success. Almost a year exactly since the release of Picture Perfect, hindsight is indeed 20/20 for Black.

“When we were writing songs for Picture Perfect, we had so many tours going on, we didn’t have time to just sit down with each other and jam out ideas. It was kind of hectic,” he says. “I’m extremely proud of the songs, but we didn’t have a lot of time to flesh out some of the ideas, which is something we’re really striving to do for the next record.”

Though, Black says the band’s next album is still a long ways away.

“Jimmie, Josh and David are constantly writing, we just haven’t sat down and talked about what ideas we want to use yet. It’s still in the really early stages.”

In the meantime, Black and his band mates don’t hesitate to make retroactive edits to some of their songs when necessary, though he’s quick to assert the changes are ones only he himself likely notices.

“I play a lot of stuff differently live, but it’s literally the smallest changes. It’s not like we added breakdowns or anything,” he says with a laugh.

Considering that the band is making some of the most infectious and danceable rock around that still feels adult accessible, they might be the only guys in this scene who could really pull off those breakdowns if they tried. Though they likely won’t go that path, it’s proof that for the members of Every Avenue, the options are still limitless.

Every Avenue perform Nov. 17 at the House of Blues Sunset Strip. For more information, visit myspace.com/everyavenue.