Street Drum Corps: Take Up Residency at the Roxy 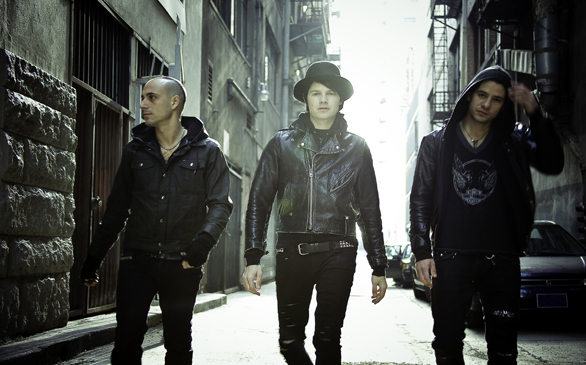 Anyone looking for something new on the Sunset Strip will find what they’ve been searching for when they go see brothers Bobby and Adam Alt along with Frank Zummo, who make up the Los Angeles-based Street Drum Corps. The band has been together since 2004 when they decided to focus on a brand of drumming all their own. From the very beginning they were using found objects, everyday items and elaborate setups in their performances.

“The first day that we ever played together was on found objects. At Bobby’s rehearsal studio in downtown L.A., across the street is a junkyard. We just went there with a pair of drumsticks each and a video camera and jammed for an hour. It was interesting to use all of this found stuff and find out how to get a car door to sound good, and we just went with it and it evolved from there. You want to bring that on stage and beat on it, and it actually sounds cool? There are no rules in Street Drum Corps. We are able to do whatever we want.”

When I spoke with Zummo, he was driving to meet fellow band members Adam and Bobby Alt for rehearsal for their upcoming residency, which takes over the Roxy. Preparing for the shows, the band went all out.

The Roxy residency is a break in the band’s busy touring schedule and is the first time that people will be able to see them play anything of this scale.

“We’re bringing in the most production we’ve ever had,” says Zummo. “We really have never done anything like this before. It’s a mixture of all three of our drum records. [Street Drum Corps (2006), We Are Machines (2008) and Big Noise (2010) will be available exclusively at the Roxy shows.]”

Inspiration for the band comes from everywhere, making their shows a conglomeration of sounds from all over the world of music and performing art.

“We really are inspired by groups that are pushing the levels and doing things outside the box,” Zummo explains.

The band is influenced by everything from electro with nontraditional dirty beats to Las Vegas Cirque De Soleil shows to “Stomp.” They are in turn inspiring other groups like their past touring partners, Linkin Park.

The new album, Big Noise, is available at the Roxy, but in 2011 a deluxe edition will be widely released with bonus tracks, including a song with an impressive list of collaborators brought together by the band.

“It’s fun for drummers to get away from their bands and just slam on a keg or do something that they are not used to, so we just made a wish list of drummers and everyone came down [to record],” says Zummo.

Along with the residency, the band is working on polishing and recording their album.

“We’ve been doing half days in the studio. We’re finishing our main record with the singing on it, and next week we’ll be in to record more drums,” Zummo says. “We went and toured the world and really became a band with the addition of the singing, and we came home and we wrote a bunch of these songs that the label is really excited about. So we’re recording them. We are about to finish them and get it all done before this year is over.”

In the new year, expect to hear more from the group as they plan their next tour.

“We hope to take this thing to New York, Miami, do residencies all over and then eventually land in Las Vegas,” states Zummo.

Not only will the band be on tour and supporting their album releases, but they will also continue to support their franchise bands, Street Drum Corps presents BANG, in the coming year. So we can all look forward to hearing and seeing a lot more from these guys in the years to come!