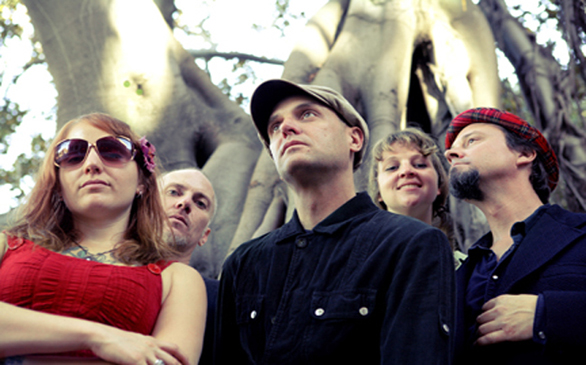 The upcoming release from Goldenboy may be called Sleepwalker, but the band’s head honcho, Shon Sullivan, is hardly a somnambulist. The Diamond Bar native was playing guitar and piano in a band called Spain when Elliott Smith took notice and drafted Sullivan into his band. The exposure that being in Smith’s band afforded Sullivan led to side gigs with Eels, the Rentals and Neil Finn and also gave Sullivan a chance to establish his own brand.

“It started as a solo side project,” says Sullivan. “I started writing the first record (2003’s Blue Swan Orchestra) while I was playing for Elliott, which I did for four years. Everyone had nicknames on the tour and ‘Goldenboy’ was mine, because I was a guy from the faraway hill country or something, and it stuck.”

Mastered and engineered by Don Tyler, who worked on all of Smith’s albums, Sleepwalker is due to drop in early February on the Eenie Meenie label. Hear some of the new songs when Goldenboy appears at Casey’s in downtown Nov. 19.

Get Ready for Rock To Roll

Side One Dummy Records has announced that Dec. 8 is the day you can help out the non-profit organization UCP Wheels For Humanity by attending the Rock To Roll event featuring a concert performance by Anti-Flag. Wheels For Humanity works to provide wheelchairs for children in need throughout the world and has helped over 44,000 kids since their inception in 1996, and Side One Dummy and Rock To Roll has raised lots of money for the cause, including $23,000 brought in by last year’s event in San Francisco.

This year’s Rock To Roll show at the Key Club also features the Black Pacific, Heartsounds, Destruction Made Simple and Punk Rock Karaoke, an all-star band made up of members of NOFX, Bad Religion, the Adolescents and Social Distortion. An online auction is also being held to raise cash; if you’d like to bid on autographed memorabilia from Flogging Molly, NOFX, the Gaslight Anthem, the Bouncing Souls and others, visit ucpwfh.org.

In jazz circles, there are few labels that carry the cachet of CTI Records, the independent imprint founded by Creed Taylor that in the ’70s put out records by heavyweights like Chet Baker, Stanley Turrentine, George Benson and Antonio Carlos Jobim. The label went under when the bottom fell out of vinyl sales but has now been resurrected by Sony Masterworks in conjunction with the 40th anniversary of its founding, and a major re-release effort is underway.

First up and available now is a two-CD version of the legendary California Concert: The Hollywood Palladium, the 1971 show that featured Benson and Turrentine along with Freddie Hubbard, Hubert Laws, Hank Crawford, Johnny Hammond, Ron Carter, Billy Cobham and Airto Moreira. With the addition of five songs not included on the original album, the California Concert reissue presents the all-star jam in its entirety for the first time ever. At least 10 more CTI titles will be getting the reissue treatment over the next few months.

Get Snowed In for the Holidays

Foxy Shazam, the Flaming Lips, Everest and American Bang are among those getting into the holiday mood for the new Warner Bros. compilation Gift Wrapped II: Snowed In. The seasonal release contains brand new original Christmas songs from Cavo, Devo, Regina Spektor, the Goo Goo Dolls and Rachael Yamagata along with covers like Oasis performing Slade’s “Merry Christmas Everybody” and Stardeath and White Dwarfs taking a turn with Wham!’s “Last Christmas.” Some Christmas standards are included too; House of Heroes sings out “O Come, O Come O Emmanuel” while “Little Drummer Boy” gets re-imagined by the Flaming Lips. Snowed In will be available at digital retail next week.

Are you one of the fans who helped raise money to finance singer-songwriter Bleu’s new album Four? If you put some cash in Bleu’s kitty at kickstarter.com, then you probably know that Four has just dropped and that the man who has written hit songs for and with the Jonas Brothers, Selena Gomez, Jon McLaughlin and Kate Voegele is currently on tour; catch him at the Hotel Café Dec. 9.