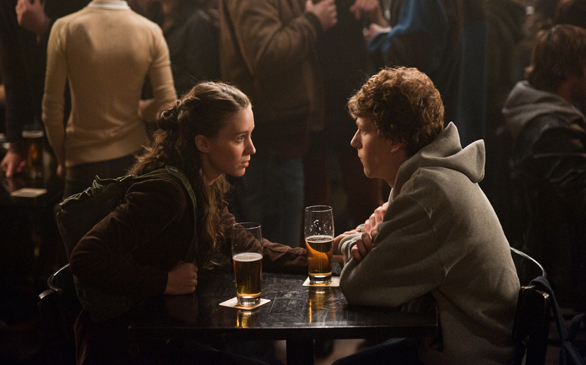 MARK ZUCKERBERG, a “sweet-looking 19-year-old whose lack of any physically intimidating attributes masks a very complicated and dangerous anger. He has trouble making eye contact and sometimes it’s hard to tell if he’s talking to you or to himself.

ERICA, also 19, is Mark’s date. She has a girl-next-door face that makes her easy to fall for. At this point in the conversation she already knows that she’d rather not be there and her politeness is about to be tested.”

What then ensues is one of the most memorable (and possibly my personal favorite) dialogue-heavy film openings in the history of film. It is a bit over the top, but how many people of the average viewing audience have been hit by, say, the opening line from Hitchcock’s Rebecca (1940)? “Last night, I dreamt I went to Manderley again.” Sure, everyone knows the whole “Rosebud” mystery by now, but that’s because you can’t call yourself a film fan without watching Citizen Kane (1941) umpteen times.

However, that was in the so-called Golden Age of Hollywood filmmaking, when ideas were fresh and eagerness was the friend of success. What do we have in theaters now that makes us like film? Sam Mendes always does us a favor by creating memorable openings (remember the American Beauty (1999) home video of Thora Birch and that damn plastic bag?). Even Christopher Nolan’s The Prestige (2006) was pretty cool the second time we watched it, knowing what we finally figured out by the end of the first viewing.

However, unlike these films and hundreds of others with similarly brilliant openings, none are as great as David Fincher’s The Social Network (2010). Why? Because Aaron Sorkin is a screenwriting god.

As many of you may well know, Fincher is a master of the aesthetic of filmmaking. His past masterpieces include Brad Pitt star vehicles Se7en (1995), Fight Club (1999) and The Curious Case of Benjamin Button (2008), and you have to admit, the guy’s got style. A pattern that seems to intertwine (at least the appearance) of his films is his tendency to have low-key lighting with green or blue-tinted color temperature to set the mood of a scene.

The Social Network is no different. The opening scene I’ve been raving about is, like most the film, strangely yellow, recalling a beer haze you used to get in college perhaps? Maybe it’s the same color you would associate with a stale relationship? Regardless, the color permeates the dialogue between Mark and Erica.

MARK: “Did you know there are more people with genius IQ’s living in China than there are people of any kind living in the United States?”

Genius is exactly the word I would use to describe Sorkin’s ability to cast tone, mood, character development and plot establishment within the first 10 or so minutes of a film. The actors, in this case Jesse Eisenberg and Rooney Mara, play the dialogue like it’s one long, leisure game of tennis that escalates and hits every crescendo so the crowd can take sides, but still marvel at each opponent’s strength.

If you haven’t seen the film for yourself, I apologize for possibly ruining something, though I don’t think anything can do it justice like the footage itself. Hopefully by the now, the posters and trailers have made it clear exactly what the film is about: Mark Zuckerberg, the creator of Facebook, must fend off suing friends and enemies to maintain his vision for the social networking site.

Aptly marketed as “the most modern and timely movie of 2010,” the film lives up to the hype, primarily because of the aforementioned script that contains rapid-fire dialogue as well as compellingly smart chronology. As a treat to script junkies like myself, the American Cinematheque at the Aero Theatre is hosting a screening of The Social Network on Sunday, Nov. 21, followed by a Q&A with the man himself, Aaron Sorkin. I don’t get starstruck or celebrity giddy because, frankly, actors are all the same. But what I wouldn’t give for Aaron Sorkin and even an ounce of his ability.