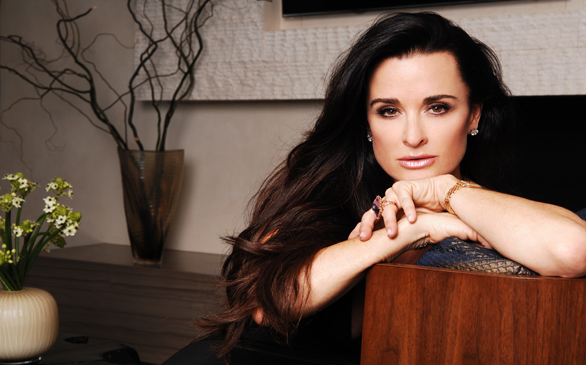 Kyle Richards has an enviable life. Since childhood, she made a splash on the Hollywood scene as a noted child actor. She and her sisters, Kim and Kathy, were the Fannings of their day, appearing in everything from television shows to horror films. As an adult, Richards is married to the love of her life, real estate mogul Mauricio Umansky, and just happens to be the aunt of world-famous starlets, Nicky and Paris Hilton (with whom she bares a striking resemblance). From a glance, she makes it all look flawless and easy. But ever since Bravo’s latest installment of its successful “Real Housewives” franchise, Richards is garnering respect and praise from fans who see that she’s just as normal as they are.

“The Real Housewives of Beverly Hills” is the much-talked about reality show that chronicles the daily comings and goings of a handful of fabulously wealthy married women living in the nation’s most coveted zip code. Richards stars opposite her sister Kim as well as friends like Adrienne Maloof (owner of the Palms hotel and casino as well as the Sacramento Kings) and frenemy Camille Grammer (former wife of actor Kelsey Grammer). Each week, their every moves are projected to millions of people with little to no filtering for matters of public relations.

So, how does one become a Real Housewife? Well, you could say that coming from a famous family has its perks: In 2005, she appeared on TV in a show featuring her nieces Paris and Nicky. It was this appearance that set her current undertaking into motion.

“Funny enough, somebody saw me on ‘E! True Hollywood Story’ and they thought I’d be perfect for this,” she says.

With the support of her immediate family, which also includes daughters Alexia, Sophia, Farrah and Portia (her youngest), Richards signed on, and the rest is history. She deals with the same rigors of family life that other wives and mothers do, including sibling issues and juggling a complicated schedule.

Since this season got underway, audiences have been treated to a number of happy and candid moments, including Richards and her friends attending a Jay-Z concert in Vegas. Interestingly, the platinum-selling rapper isn’t the only contemporary musician that she enjoys. She lists the Black Eyed Peas, Britney Spears and Fergie among her other favorites. But just when it’s assumed that she might be more Hollywood Hills than Beverly Hills, Richards brings it back home.

True, the Beverly Hills wives buck expectation at every turn. Richards is not only chic and glamorous, but she demonstrates a lot of heart and hands-on interaction with her family – a fact that TV often suggests is handled by hired help (Grammer, herself, admits to having four nannies for her two children.). Still, with all the lighthearted charm on the show, the blogosphere has often fixated on the catfights and disagreements. In the weeks prior to its debut, Bravo leaked images of Richards arguing with her sister and also spilled secrets about her tension with Grammer.

To speak with her, you get the sense that the sudden addition of strife is something new to this wife and mother. In spite of the eye rolling and cringing that some of the cast members do behind each others’ backs, Richards tries her best to take it all in stride.

She even admits that at times she feels out of place among all the badmouthing. Some of the altercations even have her fantasizing about a stint on another cast of the popular show.

“I would have to say New York,” she says. “I feel like I would fit in a lot better there.”

This admission begs the question: Will she return for a second season of the hit series?

“It depends on what day you ask me,” she says.

“The Real Housewives of Beverly Hills” airs Thursdays at 10 p.m. on Bravo.