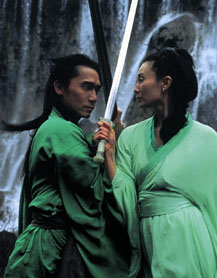 Finally arriving in U.S. theaters after a two-year series of baffling postponements on the part of distributor Miramax – even receiving an Oscar nomination for Best Foreign-Language Film – Zhang Yimou’s Hero, now presented by Quentin Tarantino in its original director’s cut, fails to justify its lofty worldwide praise.

The work of China’s most prestigious living filmmaker, Hero digs deep into Chinese history with the story of a seemingly patriotic assassin (Jet Li) – dubbed Nameless in an apparent homage to Clint Eastwood’s enlightened gunsmith in Sergio Leone Westerns – who arrives at the kingdom of Qin to receive the commendation of the king (Daoming Chen). Nameless claims to have defeated rivals Broken Sword (Tony Leung Chiu Wai) and Flying Snow (Maggie Cheung), thwarting their plans to destroy the kingdom. The king, however, believes that Nameless has come to assassinate him.

The entire film plays out as a Rashomon-styled battle of wits, with the two men recounting past events with wholly different results. Yimou’s structure is a fascinating way to shape a battle epic, but it’s hard to emotionally invest in characters that perish multiple times.

Hero stands in sharp contrast to other Yimou films (Raise the Red Lantern, To Live) because of its heavily stylized action sequences. The acrobatic, gravity-defying swordplay (if the sound of clanging swords makes your ears bleed, stay far away) is undeniably breathtaking, but Hero’s beauty feels synthetic, its grit painted on. Where Crouching Tiger, Hidden Dragon imbued its action with spiritual grace, Hero’s action sequences – however vivid and entertaining – play out as mere exercise.

Yimou’s film is about as patently cinematic as historical films get, but somewhere beneath the visual and structural pizzazz, the human story gets lost.