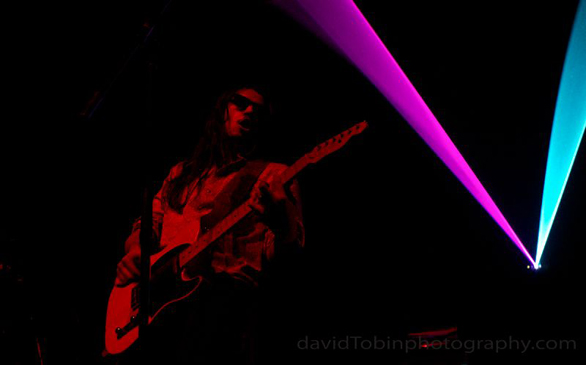 Have you ever had the chance to attend a concert when it’s the lead singer’s birthday? It’s kind of an amazing thing. The whole place instantly starts off in party mode, and the energy puts things on a whole new level. Now imagine that the band you’re seeing is the underground sensation Ghostland Observatory.

The show started with the crowd singing “Happy Birthday” on their own accord as the intro music began. Then fog filled the stage and drifted into the audience. Hands raised in the air to grab the faux clouds that were startled by an array of lasers from every direction.

As soon as the first song kicked in there was no holding back the crowd. Bodies began to fly over the barricade in a fit of sweat and smiles. One song after another, the band continued to push the limits of the sound system at Club Nokia. Rumbling bass in the last few songs even jolted the curtains from the sides, which the fans quickly grabbed on to until security pulled it back.

The fans seemed very pleased with the set, and the show was solid. However, some people were a little upset that a lot of the new album was performed and one of their most famous jams was missing from the set, “Dancin’ on my Grave.”

Fans come out to see bands play stuff they know; using a few new songs is fine but adding too much into the mix will slowly alienate your crowd because they can’t get into the music. Ghostland is excellent at realizing when their fans are starting to slide, and they quickly adapted their setlist to keep the party moving.

It was mentioned earlier, but it needs to be revisited … The light show was awesome. I know that’s not very poetic in its description, but there’s no better way to put it. The investment on lasers for this show was well spent and used properly. Sometimes the lights play in the background, but this time they were the main attraction. From song to song they helped tell a story and whip the crowd into an overwhelming frenzy by the time the show was done.

No matter how big the lights are or where the show is, Ghostland Observatory is always an amazing band who should not be missed no matter what your musical taste is.