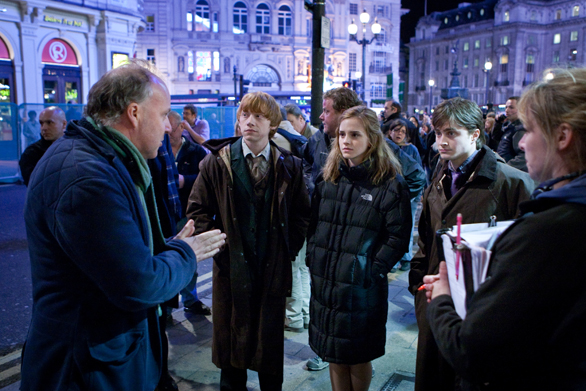 It’s here, Potterheads! For those of us who have read all of the books, fell asleep to the narration read to us by Jim Dale and naturally have seen all the films, this is the most anticipated movie of the year. Harry Potter and the Deathly Hallows is a whale of a book, one with such precise and exhilarating detail, many of us were unwilling to believe that there was any possible compromise that the movie and book could find in order to be mutually inclusive and exclusive: meaning, we don’t want the movies to destroy the book we love, but we also don’t want the film to be wholly dictated by the thick monster of a story.

What has been produced is a film that is Harry Potter without purely being a Harry Potter film, one that takes us into the wizarding world without confining us to it. Thanks in large part to the detailed set decorations which do not, unlike the previous six films, include Hogwarts School of Witchcraft and Wizardry, the film is for real people, not just Potter people.

It must be said, however, that the story moves rapidly through plot development; screenwriter Steve Kloves had a tremendous amount of ground to cover, even when the book was split into two movies, and this first part takes the incentive of following Harry, Ron and Hermione as the Ministry of Magic falls, and the despicable Death Eaters siege. The plot is so complicated and winding that it’s difficult to give all the details without forfeiting the movie magic. Harry is “Undesirable No. 1” for the ministry under the control of Lord Voldemort and his cronies. With the help of his best friends, Ron and Hermione, Harry must decode the items left to them in the will and testament of Professor Dumbledore, obtain Horcruxes, destroy Horcruxes and maintain as much of their friendship as possible amid the journey.

Vague? Yes, it is. But whether you are a die-hard fan, or you’ve never heard the name, there is something here for you. David Yates, thankfully, returned to helm a Harry Potter film fully developed and emitted into the realm of adult moviehood. It’s rated PG-13 for a reason, so leave the younger ones at home. The cast is, as always, enchanting. The three leads have really come into their own to convince us that in this final chapter, it’s as magical for them as it is for us.


Harry Potter and the Deathly Hallows: Part 1 is currently in theaters.
Article posted on 11/22/2010
This article has been viewed 1562 times.