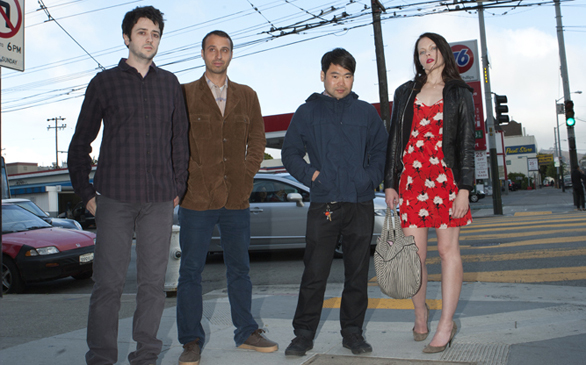 For non-Francophones, it’s pronounced “Ohz Oh-trah.” And they’re not French; they’re from San Francisco. Now that we’ve gotten that out of the way, Eux Autres’ third album, Broken Bow, is fantastique.

This body of work simultaneously reminds of classic indie pop à la Shonen Knife and the Bristols and at the same time contemporary bands you’d find rocking a gallery in Silver Lake. Heather and Nicholas Larimer’s vocals are genuine and honey sweet. The lo-fi sound is uncontrived and refreshing. The focus is instead on excellent songwriting, and there’s no reason to jazz up these tunes with flashy production. Producer Jason Quever’s live-sounding mix gets it just right.

The disc opens with a seemingly obligatory French track, the only one on the album, the almost chant-like “Jamais” with its rudimentary lyrics and endearingly simple tune to match. “Queen Turner” is perfect daydreaming fall listening.

“Under Rays” and “Wind Me Up” are reminiscent of classic ’60s garage pop, and I must admit I’m a sucker for nostalgic hand claps and “sha-la-la-la” backing vocals, which both use liberally to sweeten the deal. “A Band Undone” is melancholic without going off the deep end, remaining afloat on a hopeful undercurrent. “You’re Alright” is one of the album’s most memorable tracks, with highly personal lyrics that at times sound a bit like an inside joke between friends but with enough universal appeal to make it work.

“Rosehill” rocks out with crunchy guitars and a driven beat. “Go Dancing” is sparse on the verses, rising up on the chorus and a lovely fuzz-guitar solo. Their cover of Springsteen’s “My Love Will Not Let You Down” is perfection, while “Take It or Leave It” rises up on a wave of thunderous toms, rhythmic guitar and droning organ. “Cover Rights” is urgent, full of bittersweet disappointment without losing its innocent edge.