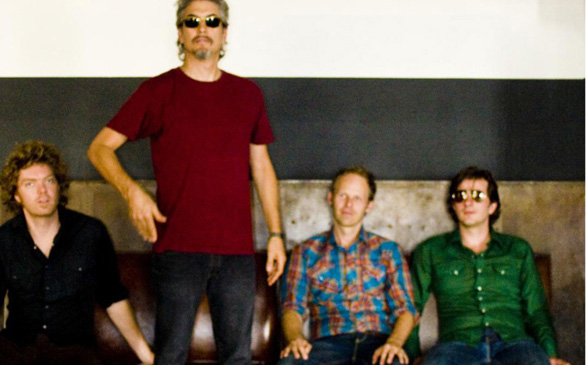 Over the course of 25 years and 17 albums, Howe Gelb, the man behind Tucson’s Giant Sand, has been described as everything from an Arizona-fied Lou Reed to the desert’s very own Tom Waits. Giant Sand is big in Europe, revered regionally in America’s Southwest and adored in other pockets of the country, but the band has never established an identity with the masses. Some artists would consider that situation a major drawback and there’s little doubt that Gelb would love to be rolling in dough, but the upside to being a critic’s darling, a band making music just for insiders, is the artistic freedom that allows for the creation of sublime gems like Blurry Blue Mountain.

There are a few western-flavored rockers here like “Thin Line Man,” but for the most part, Gelb’s singing is understated and set to subdued arrangements; the technique works perfectly on “Spellbound” where the mystery of falling deeply in love is made all the more mystical with poetry like, “There inside her whisper/Is a lyric that can’t be forgotten.” Gelb can certainly turn a romantic phrase but the music of Giant Sand, ironically in light of lack of sales, is geared to everyman and his concerns. For “Brand New Swamp Thing,” a funky Little Feat-like number, Gelb spins out a fantasy (or is it?) of the broke and lonely fellow who finds female salvation on a dark highway while on “Ride the Rail” he sings the workingman’s blues from the perspective of an olden days Arizona copper miner.

There are so many comparisons to make here, but perhaps the best reference point comes via another often underrated Arizona band; if you like the sound of Meat Puppets albums like Too High to Die you owe it to yourself to check out Blurry Blue Mountain.