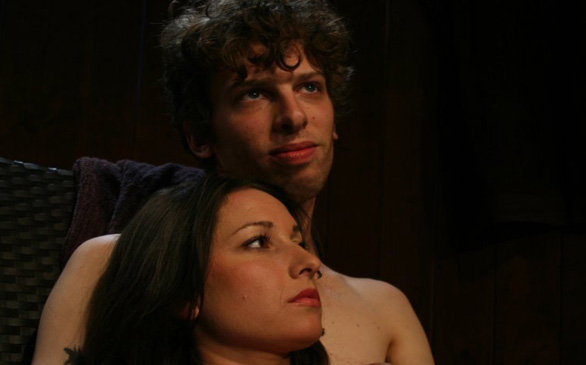 Have you ever dated someone you know isn’t good for you? “Summer in Hell” is sort of like that. The relationships are alarming and twisted yet so enticing to watch.

The world premiere of Miles Brandman’s play can best be compared to the drama and guilty pleasures of “Gossip Girl.” You watch with intensity and simultaneous disbelief. Nothing beats watching pretty people do bad things. The show is never stagnant, which is rare for a small cast in one setting. Director David Jette implements wonderful stage direction with smooth transitions.

There is always something to watch. Whether you’re mesmerized by Pat walking around in a bikini or a hopeless fight against incest, the plot is fiercely intriguing.

The four actors are all fantastic. They each play their characters with conviction and commitment to detail. Jenich perfectly portrays the mastermind of the operation. He’s always a step ahead, whether he’s scheming or just playing host.

It doesn’t seem like this is Harmon’s first time playing the in-control girl with attitude. She has it nailed, making it completely believable.

Powell and Gordon are perfectly and undeniably lovable. Their wit mixed with innocence makes them both a delight to watch. Their chemistry is fresh and comical.

Set designer Sarah Krainin and costume designer Fabiana Pigna deserve additional applause for their contributions. Although there were only slight transformations in these areas, the audience really feels like they’re in the backyard of a hoity-toity summer estate.