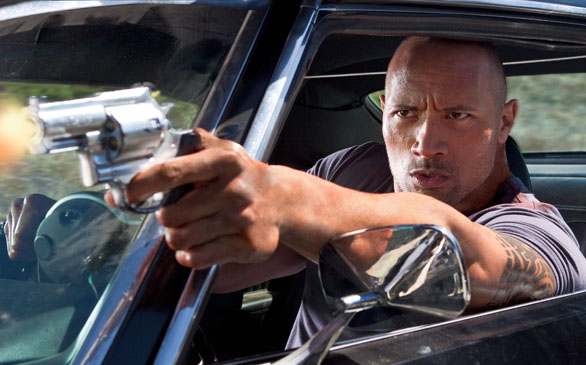 He was just a dumb kid following his brother into a life of crime, so he decided to be the driver of a getaway car in a bank robbery. The plan seems like a perfect way out of poverty and boredom. That is, until the robbers realize somebody who was aware of their heist has set them up. Each member of the crew is picked off, and as the driver looks on, he sees his brother murdered as well. The driver is carted off to prison where he will waste away on a 10-year stretch.

But if you’re thinking this guy is merely marking time getting jail buff, finding Allah and trying not to drop the soap, think again. He’s making a list and checking it twice; this bad boy is out for revenge, and he’s starting with every person he suspects set him up.

As the driver sets out on his vigilante quest, a slinky, James Bond-type killer (Oliver Jackson-Cohen) is fast on his trail. This guy is one of those “ab-tastic” rich boys who conquer every single thing they attempt. However, he finds that he has met his match against the driver. This killer is fast, but the driver is faster. Pursuing both of them is a cop (Billy Bob Thornton). With just a week left on the force before his pension kicks in, this guy isn’t looking to make any waves. He’s going to catch up with the driver and make sure he pays dearly ... for everything.

Faster marks Dwayne Johnson’s return to the action genre after several G-rated collaborations with Disney. As the driver, he amps up his beefy physique, made famous early in his show business career. Johnson gained a mere 10 pounds of lean muscle over three-and-a-half months, but the results are staggering.

“Bigger is always better,” he jokes. “I worked my butt off for this movie.”

Still, working on his fitness was less an impetus for taking his role. Turns out, it was the material that moved him.

“I didn’t think of [my character] as a hero, nor as a cold-blooded killer,” says Johnson. “I looked at him as a man I felt connected to.”

The similarities the actor shares with his gun-toting, no-nonsense onscreen counterpart come from the more intense and dramatic scenes in the movie. Aside from the eardrum-splitting car crashes and gun battles, Faster boasts some amazing performances from its entire cast. Johnson had to dig deep to portray one altercation in which he appears opposite Adewale Akinnuoye-Agbaje. The scene requires him to forgive the man who is partially responsible for his brother’s death and his incarceration.

“I was pretty moved by the emotion,” he says, adding “It’s really special when you can have scenes like that.”

As for the fans, the real fun comes from watching Johnson’s impressive talents. Like Steve McQueen before him, he is the consummate badass, right down to his bitchin’ wheels. The driver does his dirty work in some good old-fashioned Detroit steel.

The driving stunts are tense and well choreographed, but more importantly, Johnson executed them himself. Director George Tillman Jr. was adamant that Faster was steeped in the kind of authenticity that moviegoers crave. This has led some critics to question whether the movie glorifies killing, violence and destruction or is merely a reflection of it. Thornton, who has appeared in his fair share of controversial films, has his own opinion.

“We’re living in a time when we’re making some of the worst movies in history because they’re geared toward the video game-playing generation,” he says.

To him, Faster is not a glorification of senseless violence, but, in fact, acts as a story of one man’s quest to find himself – with some collateral damage along the way.

As for Johnson’s future collaborations, now that he’s held his own alongside Thornton – an Academy Award winner – he doesn’t rule out teaming up with other action stars on future projects. So, don’t be surprised if this time next year, you’re watching the trailer for a Dwayne Johnson-Jason Statham testosterone-fest.