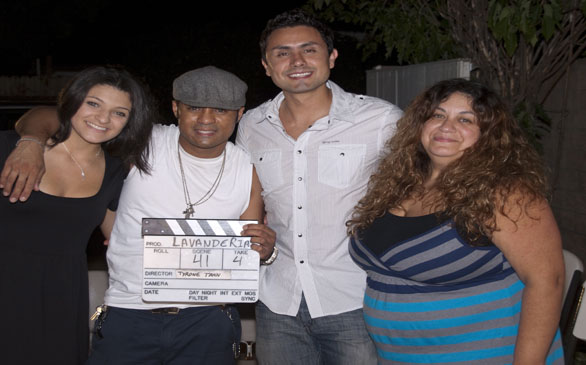 Tyler Perry started the successful trend of movies with a message for communities across the world, and now other filmmakers are following in his footsteps but taking it further: making a film where the profits go back to the community. At a time when so many are going through difficult times, here is some background information about a movie with the goal of making a difference. Get the scoop from the filmmakers and stars of the independent film that is receiving industry buzz: Lavanderia.

What is the message of Lavanderia?

Tyrone Tann (director/producer): The message is about forgiveness, love, the act of kindness … ultimately, love.

Is it true that you’re donating money made from screenings back to the community?

Tann: When we first discussed the movie, Stephanie [Contreras, writer/co-producer] and I had talked about doing something positive. We wanted to hold free church screenings, invite the cast and do Q&As. If a church wanted to raise money, we offered to let them keep the money as a unique way for them to fundraise. We would like to reach high schools, colleges, soup kitchens, etc. We are open to any screening that involves giving back. With DVD sales, we see the possibility of making money, but the outreach is about giving back in a movie forum.

What attracted you as actors to be a part of this project?

Jai Bugarin (Ray): I’ve been friends with Ty, and I’ve always admired how much he pours his heart into his projects. Once I read the script, I really liked the arc of the character Ray and knew I wanted to tackle the role.

Delanie Armstrong (Alina): I wanted to be a part of this film because Lavanderia has a beautiful message. It doesn’t matter who you are and what happens in your past. There are second chances, and there is a lot of forgiveness in this film.

What was the biggest challenge in playing these characters for you as actors?

Armstrong: One of the biggest challenges for me was the long hours and fast-paced schedule. We had to be prepared for every change, take and move. I tried to embody my character as much as I could, even when I was away from set.

Bugarin: The biggest challenged was being a lead and carrying so much weight. This character was so complex. Ray goes through many spiritual and physical challenges with the people around him. I worked hard to make it believable.

Is there any advice you can give to aspiring filmmakers and actors?

Contreras: If anyone has a dream and desire, you should act upon it. You have to be willing to face success and face failure. But it will be an experience that you’ll never forget and you’ll learn from.

Tann: For filmmakers, if you have a project in mind, just go out and do it. Get with people that believe in the same project and goal.

Bugarin: My advice would be to believe in your craft, have perseverance and know that patience will get you anywhere.

Armstrong: I would have to say that it’s very cliché, but don’t give up and you have to believe in yourself. We bypass those phrases because they are so commonly used. If you don’t have faith and believe in yourself, you will fall off track.

The filmmakers and cast have agreed to do free screenings at churches in various communities in addition to Q&As with the cast and crew with all profits going back to the community.