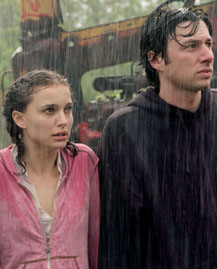 Garden State is a movie about the surreal experience of going home again from what was supposed to be the rest of your life. It is a comedy with so many moments of found insight and irony that it can scarcely contain them all. One of these occurs in a doctor’s office, where Andrew Largeman – commonly known as Large – has gone to have his head examined.

The camera crawls slowly up the doctor’s wall, which at first appears to have only the customary cluster of diplomas, reassuringly framed. But at the top of the wall, the camera tilts up and finds a diploma that has been squeezed onto the ceiling.

The shot is emblematic of the film’s willingness to stand outside itself – the way New Jersey stands outside New York City – and consistently look for the thing that is most out of the ordinary. If laughs from quirky ideas could be laminated and framed, this movie would have them on the ceiling. It may have you on the floor.

Going home doesn’t seem as if it should be much of a strain for Largeman – he’s a struggling actor in Los Angeles, waiting on tables in a trendy restaurant where everyone yells at him – but it is. Played by Zach Braff, who also wrote and directed the picture, Large has managed to stay away from his family and friends in New Jersey for nine years. When he’s finally forced to go home for his mother’s funeral, his father (played with a look of perpetual dismay by Ian Holm) turns it into a guilt trip. "I’m glad you could fit it in," he says after the burial.

The funeral service ends with a middle-aged woman singing an over-amplified version of "Three Times a Lady" in a sketchy voice. This is every bit as bizarre as it sounds. When Largeman runs into the same woman later at the reception, she insists that he try on a shirt she has made from scraps of his mother’s wallpaper fabric. Wearing the shirt while standing in his mother’s wallpapered room, Large begins to disappear.

Part of the genius of Garden State is the composition of such shots, which allow Braff to maintain the movie’s dreamlike quality. He borrows liberally from shots that were made iconic by The Graduate, the 1967 comedy that explored the same themes of floating toward manhood as if it were a waterfall. Probably best known as a member of the ensemble on the television series "Scrubs," Braff makes an audacious directing debut here. At 29, he becomes one of Hollywood’s rare triple threats.

Large, on the other hand, is mostly a threat to himself. He has never gotten over accidentally putting his mother in a wheelchair, and his physician father has made his grief perpetual by keeping Large in a medicated haze of antidepressants. Largeman is a disappointment, and he knows it.

When he goes home, he runs into a couple of old friends from high school who are in a fog of their own, stoned most of the time and working as gravediggers. After they finish covering up Largeman’s mother, they fire up some dope at the house Mark (Peter Sarsgaard) shares with his mom (Jean Smart), who takes bong hits with the boys. A caring mother, she tries to persuade Mark to find a job in a form of real estate that doesn’t involve dead bodies.

There are moments in Garden State that don’t sound particularly promising but are. When Large encounters the most irresponsible kid he knew in school, he turns out to be a cop. Later, a guide dog for the blind humps Large’s leg, and while that indignity is being visited upon him, he must contend with another: A young woman named Sam (Natalie Portman) recognizes him from a movie in which Largeman’s character had a mental handicap.

"If there was some sort of retarded Oscar, you would win it hands down," Sam tells him earnestly. "I can’t believe you’re not really retarded!"

Sam sees through the fog of prescription drugs on which he is living Large, providing him with a beacon of color and periodic flashes of light. Portman has lately been saddled with the ponderous headgear of Sen. Padme Amidala in the Star Wars movies, but here she gives a performance so enchanting that it delivers fully on the promise of Beautiful Girls, which she made in 1996 when she was still a teenager.

Garden State offers hope to all the people who haven’t yet lived up to the promise they showed as teenagers. Which turns out to be most of us, after all.