Tangled: Mandy Moore and Zachary Levi let their hair down. 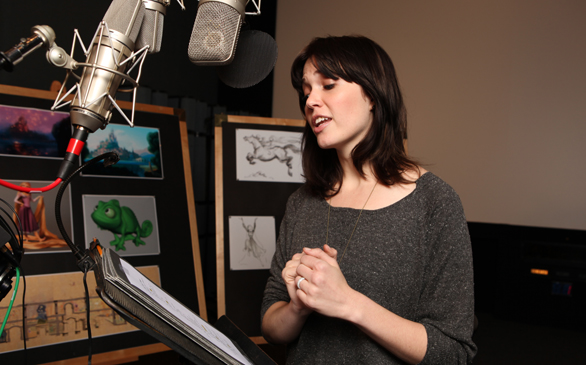 Rapunzel, the tale of a long-locked princess trapped in a tower, began as a Grimm’s fairy tale but has gone on to infiltrate culture on all levels, from bedtime stories to Beastie Boys lyrics to the classic farce, Airplane! In the new film, Tangled, the tale is rewoven once again.

Renamed because Disney felt The Princess and the Frog would have fared better had it not had the word “princess” in the title to alienate male ticket buyers, Tangled infuses the classic story with a strong feminist streak, dazzling beauty that actually justifies its 3-D projection and Alan Menken music, one of the touchstones of Disney’s great late 20th century films like Beauty and the Beast, Aladdin and The Little Mermaid. Featuring the vocal stylings of Mandy Moore (actress, singer, designer, well-adjusted former teen star) and Zachary Levi (“Chuck”’s Chuck), Rapunzel’s golden locks are fitting considering the film is the 50th released by Disney.

Sitting down with the actors at Disneyland, where the night before they’d met their character counterparts in the park, neither had fully absorbed the enormity of what it meant to be part of the Disney legacy.

“You can’t get more classic than being part of a Disney animated film,” Moore beams, tucking a stand of shiny brown hair behind her ear with a nail painted a sparkly nude. “For me, that’s something I’ll have in my back pocket for the rest of my life, and I feel so honored, so lucky, to think this film will be around long after I’m gone.”

“Some people have been working on [this movie] for seven years,” Levi points out. “It’s pretty incredible how long it takes to make an animated movie.”

Asked what excited them most about their parts, beyond being plucked from a field of about 500 actors all jockeying to be the next Disney prince and princess, Moore says, “I loved having the opportunity to portray a young woman who is so fearless. She’s not a victim. She’s not naïve; she’s open and warm, engaged and spirited and ready to embrace the unknown, whatever comes her way. What I knew about Rapunzel was the sort of damsel in distress who lets down her hair so the prince can save her, and our story kind of flips that on its head.”

“I consider myself to be a walking cartoon anyway,” Levi blurts, gesticulating wildly and beaming like he just got a new set of Star Wars bed sheets. “I kind of felt at home doing it. A little bit.”

“I love musical theater, and I’m a huge Alan Menken fan,” Moore continues. “To be a Disney princess in a Disney film, it has been a total dream come true, but it wasn’t until I got into the studio that I realized, ‘Oh my gosh, how am I gonna do this? How am I going to get through this?’”

For both actors, stepping into the recording booth had unexpected challenges, and they relied on directors Nathan Greno and Byron Howard to shepherd them through the process. The directing duo came up through the ranks at Disney, beginning as interns, and first worked together in the animation department on Mulan in 1998.

“They balance each other out and finish each other’s sentences,” Moore points out. “Bryon was really good at picking up where Nathan left off. They’re really good partners because they worked in tandem. And they were just as excited to be there as we were.”

Now that Tangled is completed, their place in the Disney pantheon secured, Levi admits watching the film can be a bit cringe-inducing. You know the answering machine phenomenon, where you hear your voice and think, “I sound like that?” I asked Levi if voicing an animated character is the ultimate version of that.

“Yeah, it is, totally! One hundred percent,” he nods. “Mandy keeps saying, ‘Oh, I heard it, and my voice sounds so shrill but Zach’s got this classic Disney hero voice,’ and I’m like, ‘What are you, cra— I sound like Seinfeld. I sound just nasally.’ I don’t feel like I sound good, and I feel like she sounds fantastic.”