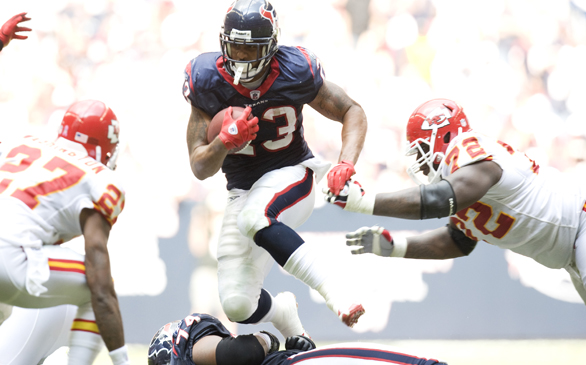 As of this writing, we’ve just finished week 10 of the fantasy football season.  Some of you, like my 7-3 team, the Fargin’ Iceholes, are making a final push for the playoffs. Some of you are starting guys on bye weeks or injured reserve because you’re so far back you don’t give a damn anymore.

Whichever camp you find yourself in, now is a perfect time to revisit my pre-draft fantasy football article where I talked about “Man Crushes.” Man Crushes are players who you not only want to have on your fantasy team, but you have to have them. They’re like the girl/guy you crushed on in high school and just could not bear living without.

And like any crush, there is always the nice, pretty girl wearing glasses who you should have chosen in the first place, because she always turns out hotter than the girl you crushed on – like Janey Briggs from Not Another Teen Movie. If you haven’t seen Not Another Teen Movie, put down this newspaper/iPad now and buy it. Now. Go ahead, I’ll wait…

Without further ado, here are my Man Crushes and their corresponding Janey Briggs:

True story, and this is why fantasy football sucks so much. I was fully prepared to draft Kyle Orton as I had been flirting with him hard, almost as much as Cutler. However, I thought he would go undrafted, so in the 10th round I said, “Hey, I’ve never had David Akers on my team, wouldn’t it be fun to have David Akers?” Yeah, real fun.

Of course, someone drafted Orton later in the round, and I was stuck playing Russian roulette with Kevin Kolb/Donovan McNabb/Ryan Fitzpatrick at quarterback. I’ll bet if McNabb played Russian roulette he would miss his temple and shoot himself in the foot. Yes, I’m bitter. One of my worst fantasy blunders ever, and that’s saying something.

Not to pat myself on the back or anything, but at the time I crushed on Jamaal Charles I wrote, “A Chris Johnson clone who can only be stopped by his coach. Talent-wise, he should get 400 touches this year but will probably get much less” (pat, pat, pat). I’m also pleased to let you know that I drafted Arian Foster in the third round and Jamaal Charles in the fourth, in addition to Chris Johnson in the first, so maybe my ignorance is reserved for quarterbacks.

OK, you people really have to start listening to me. Here’s what I said about Roddy White, “He’s already an elite receiver, but most people don’t know who he is. Let someone else take the bigger name (Reggie Wayne, Larry Fitzgerald) while you get better production from White.” You’re welcome.  Hakeem Nicks could be had in the sixth round (where I got him), and he’s the third highest-scoring receiver in fantasy.

This one hurts. Not just me, but Jermichael as well, as he tore knee ligaments in week five and is out for the rest of the year. It’s as if your crush moves away during the school year; it just hurts that much more. A real shame as he was having a great year up to that point. Antonio Gates is far and away the best tight end in the league, but he doesn’t qualify as a Janey Briggs as he is already the head cheerleader and the most popular kid in school rolled into one.

Having been born and raised in Chicago, you would think I’d have jumped at the chance to have the Monsters of the Midway. I was so seduced by the intensity of the Mike Singletary glare and the tackling machine that is Patrick Willis, I completely overlooked the hometown beauty queen. For shame, Scott, for shame.

As I said before, who cares about kickers? Which makes my choice of Akers before Kyle Orton particularly painful. Oy. Have I mentioned I hate fantasy football?

Special Feature
Sports year in review: 2020 was a year of unbridled joy and incomprehensible sorrow
1,041 views

Special Feature
What would sports look like with smaller or no crowds?
855 views

Special Feature
He made most of his gap years: Capehart, 85, gets degree from USC after starting in 1952
732 views