Georgia: Its Very Own West Side Story 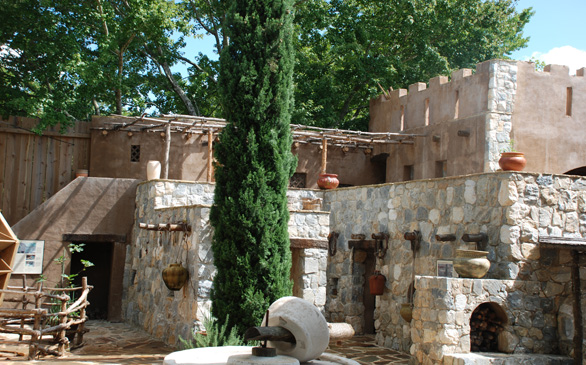 Take any route out of Atlanta and you’re going to run smack dab into something wonderful that Georgia has to offer. Up north you’ll find Georgia’s wine country and the southern terminus of hiker paradise, the Appalachian Trail. Set an easterly course to find small-town gems like the Blue Willow Inn in Social Circle, renowned for serving up a feast of Southern cooking that includes the best fried green tomatoes in the country. But it is Georgia’s west side, not far from Atlanta, where you can check out something (seemingly) very old, something very new and a lot of places with surprising pop culture tie-ins, including a town where there’s always plenty of “action!” Start your exploration of Georgia’s west side by heading south on I-85 from Atlanta and find these things along the way.

Newnan: Only a half-hour away from Atlanta, Newnan is a good place to stay when you’re visiting Georgia’s west side. Located “way down yonder on the Chattahoochee,” Newnan is the birthplace and childhood home of country music star Alan Jackson. If you’re a big fan of Jackson’s, stop in at the visitor’s center to hear a few stories and get directions to Jackson-related sites. If you’re a fan of Southern architecture, Newnan has more than 50 historic residences, including a home that served as a headquarters for Confederate general Joseph Wheeler during the Civil War. The grounds at Newnan’s Dunaway Gardens are perfectly groomed and totally relaxing, but the place didn’t always look this way; ask the guides here to show you the spot that was torn up pretty good during the filming of horror flick Pet Sematary Two.

Senoia: This charming little town is not always what it seems to be. Major filmmaking facility River Wood Studios is located here, and Senoia’s (say it like the locals do, “Sen-noy”) main street is often transformed into Anytown U.S.A. to accommodate filming. River Wood Studios and nearby locations is where films Sweet Home Alabama, Killers, Fried Green Tomatoes, Consenting Adults and many other hit movies were filmed. Kanye West, Diddy, T.I., Lil Wayne, Ice Cube and Soulja Boy have all come to town to shoot music videos at River Wood. The studio is not currently giving tours, but locals will be happy to point you to some of the town’s notable film locales, and you can never tell whom from the world of film or music you might meet walking down the street. Redneck Gourmet (redneckgourmet.com) is a good place for lunch, and they have some curious movie props on display like the surfboard from Apocalypse Now and the multi-seat bicycle from Mary Poppins.

Explorations in Antiquity Center: The Explorations in Antiquity Center (explorationsinantiquity.com) is located in LaGrange near the Alabama border, but as soon as you step onto the living museum’s grounds it seems as though you’re in the ancient Middle East. The center is home to an entire small village, complete with archeological replicas of tombs and catacombs, where “villagers” explain their lifestyle and offer samples of commonly eaten foods of the day like bread with honey. Sit for a while with a nomadic shepherd in a goat hair tent or walk through the “time tunnel” to learn about the worship habits of ancient peoples. To take the experience a step further, stay for a “biblical style” dinner where you’ll eat a feast of lamb, eggs, dates, nuts and lots more without the benefit of cutlery.

Kia Factory: For quite a contrast to ancient life as portrayed at Explorations in Antiquity, take the tour of the Kia Motors factory in West Point near LaGrange. The state-of-the-art auto manufacturing facility is only a couple of years old and watching workers interact with the robotic devices on the assembly line is almost like watching a sci-fi movie. Leave your camera in the car for this one as no photography is allowed inside.

All of these attractions are an easy day trip from Newnan or Atlanta.