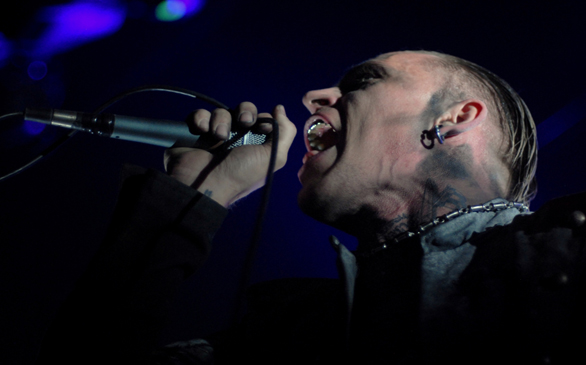 In support of their latest album, Making Monsters, Combichrist stopped by the Music Box for an amazing performance. A sea of people dressed in vinyl and leather pants were covered in tattoos, goggles, face masks and fascinating hairstyles. They stormed into the venue eagerly waiting to see the industrial band create chaos and anarchy.

As the curtains rose, the strobe and LED lights illuminated the venue. Andy LaPlegua grabbed his skull microphone stand and released a shivering scream felt from all corners. The crowd erupted as LaPlegua traveled across stage feeding off the energy in the air. Quickly covering new material, they played their latest single, “Throat Full of Glass,” as the audience showed their dedication by screaming the chorus. LaPlegua marched across the stage along with the beat, making his signature facial expressions and stage antics.

Covered in black body paint, Wes Borland from Limp Bizkit was invited as a special guitarist for the evening. He showcased his versatility of music genres. Also joining in for a song was Throwdown frontman Dave Peters. Joe Letz alongside Trevor Friedrich provided the aggressive drumbeats that caused everyone to bounce across the floor. Z Marr added the final touch to the electronic sound with his keyboard, beating the keys violently.

The night included fan favorites like “Electrohead” and “Get Your Body Beat.” Mosh pits spread across the floor as “Today I Woke to the Rain of Blood” was played. LaPlegua directed the crowd like a drill sergeant while his fans followed in awe. There were two different encores, pushing the setlist past 90 minutes. They closed off the show with the always popular “This Shit Will Fuck You Up” and “What the Fuck Is Wrong With You?” Combichrist as always gave an unforgettable performance. A must-see band next time they are in town.