Florence & the Machine/Grouplove: Nov. 8 @ The Wiltern 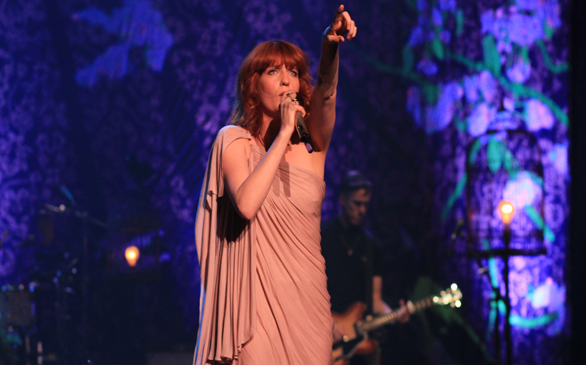 For three nights, a little bit of heaven descended upon the Wiltern. And on this, the last of a string of sold-out shows, a mixed and enthusiastic audience is treated to the kind of spectacle that will undoubtedly be described as legendary.

Grouplove warm up the crowd with their energetic and original brand of indie rock. All five members carry enormous stage presence, trading off vocals and instruments with both exuberance and precision. They’re clearly having a blast, and the energy is contagious.

Next, Florence and the Machine hit the stage. Vocalist Florence Welch looks like a Roman goddess in a spectacular gown, but despite the fact that she’s dressed to the nines, this woman rocks like she’s our generation’s Grace Slick. Her every move exudes effortless grace and power. Her charisma carries from floor to rafter and fills every nook and cranny in between. The woman is a phenomenon in the purest sense of the word: Her voice is a force of nature.

They launch into “Howl,” which is a testament to the sheer power of her instrument. “Drumming Song” suffers from timing issues with pre-programmed tracks, but Welch plows through as if nothing is amiss, and the band quickly recovers. “Cosmic Love” drives the crowd into a frenzy that will last for the remainder of the show as people spill into the aisles to dance. The Wiltern is transformed as delicate harp and piano play against thundering drums and Welch’s formidable wail.

A subdued, completely acoustic version of her hit “Hurricane Drunk” is dynamic and breathtaking. It’s just too bad that “diva” has become a dirty word, because this woman is every ounce the diva.

An encore of “Kiss With A Fist” and “Dog Days Are Over” very nearly bring the house down, fixtures quaking as the entire audience to the back of the balcony joins in a tradition of a jubilant pogo. If only every show could transport us to heaven.