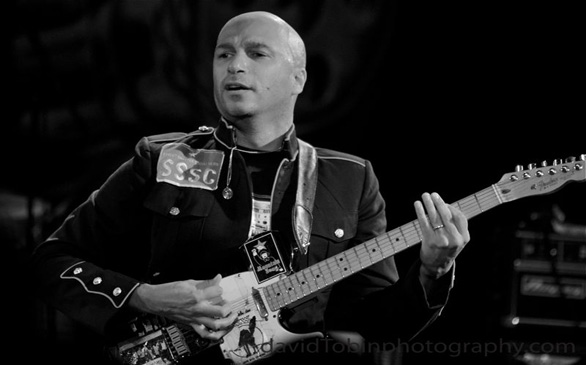 The Sunset Strip in West Hollywood is a tough place to be on a cold Monday night. The street is all but empty save for a few random cars and the occasional pedestrian. However, when you get to the very end of the street, just before the road takes you into Beverly Hills, there’s one last stop that keeps the energy flowing no matter what.

The Roxy played host to local rock station KROQ’s Locals Only showcase and with it they brought Street Sweeper Social Club. This non-stop wall of groove and rock is propelled by the unforgettable stage presence and vocal styles of Boots Riley of the Coup and the one and only Tom Morello of Rage Against the Machine on guitar.

From the minute the curtain went up the crowd was moving. It’s like Morello’s guitar playing was the incarnation of a fired-up snake charmer. Matched with Riley’s powerful vocals, the show was off to a huge start. There’s something pure about watching a band with a vital message belting out a sound that not only inspires the crowd but moves them as well.

These guys destroyed the Roxy with their sound and hearts. It’s rare to hear such a force in such a small venue. Morello’s guitar alone was worth the heat in the packed club. We are all very lucky that he has continued to create music instead of fading away like other members of great bands who break up.

Overall, this show was a perfect 10. People were moving and singing all night and even Morello’s 87-year-old mom showed up to support the Social Club. In the end, that’s exactly what everyone became a part of: a true social club.