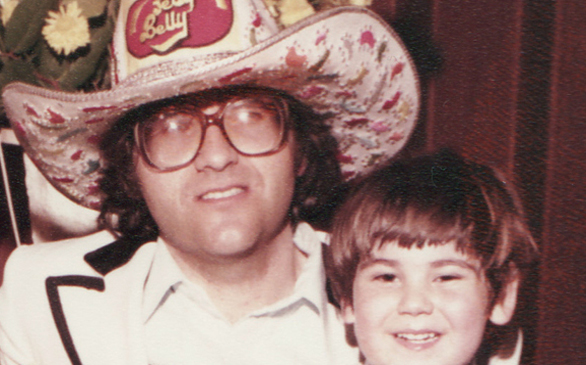 What if you created one of the largest candy names in the business? Chocolate is a world unto itself and run by less than a handful of companies. But candy – hard, soft, gummy, chewy, colorful, non-chocolate candy – is an industry that takes a hard head and a great name to catch on and be eaten.

David Klein is our real-life Willy Wonka, an eccentric, easily excitable candyman who, in 1976, developed a small, revolutionized jelly bean that would change our approach to candy. He named them Jelly Belly jelly beans, and they were not your grandmother’s old-fashioned jelly beans that stuck to glass bowls and tasted like stale, rotten sugar, granted sugar could get stale or rotten. These traditional jelly beans had uncolored pectin centers and only the outer candy coating was colored and flavored.

Klein brought in a radical idea to the stagnant candy form by introducing the use of real fruit juices and natural flavors for the inside as well as for the outer shell. Additionally, Jelly Belly jelly beans contain about half the sugar of the regular jelly bean and none of the gelatin.

The start of Jelly Belly was not a smooth one, however. Selling for $2 per pound at retail, the product was too expensive for many buyers. Klein took to the media as “Mr. Jelly Belly” to promote his product, appearing on television shows and strategically placing them in local candy shops and ice creams stores. He also appeared in magazines, most infamously in People magazine, which featured him taking a bath in Jelly Belly jelly beans.

The logo, which was designed by Kathy Fosselman and is just as recognizable as the beans themselves, has been around since the inception of the company. Ronald Reagan was also a large influence on the success of the candy. Trying to kick his smoking habit, President Reagan famously took up eating the colorful Jelly Belly jelly beans, going so far as to try to convince America that they are good for your health.

In 1980 with a deposit of $1,000, the Jelly Belly trademark was sold to Herman Goelitz Candy Company, which had been the only contract manufacturer since 1976. Klein signed a 20-year non-competitive clause, meaning he could not work on anything involving a jelly bean until 2000, and his payout was spread over a 20-year period.

“I started a company in 1976 with my last $800,” Klein says, “and, in a bizarre turn of events, was pressured against my wishes to sell out for a pittance to my contract manufacturer in 1980. My story can inspire people both to follow their dreams, as well as find the strength to bounce back from adversity.”

An official 2010 selection to the Hot Docs and Slamdance film festivals, Candyman: The David Klein Story chronicles Klein’s life in pursuit of candy creation and is an intriguing documentary, one that relies on footage and stills from the ’70s but manages to use this media as a source of irony. Klein’s appearance on the television show is simultaneously outdated and extremely familiar. Younger of course, but with the same enthusiasm, Klein is tangibly passionate. Hence, he is our protagonist, the character we know will lose, but one we hope finds another product as equally successful.

He manages to create, but not with the same popularity that greeted his Jelly Belly jelly beans. He is older, but still working on gummy urine in a jar or edible rats. He is actually in business with his daughter, but it is his son, Bert, who is so touched by his father’s triumphant rise and fall as an inventor that he is the driving force behind the creation of the film in the first place.

“I wanted to make Candyman so my kids would know who their grandfather was and what he did for the world,” Bert Klein says. “Having lived through the adventure firsthand, I knew it would be very entertaining and inspiring. This film is about far more than just ‘Jelly Bellies.’ It is an amazing story about an extraordinary man living in extraordinary times. It is a Shakespearian tragedy through the eye of a jelly bean.”

Klein currently has a new candy factory – Can You Imagine That Confections – in Covina, Calif., that specializes in “Sandy Candy” as well as his super sour jelly bean “Spanks.”

Candyman: The David Klein Story airs Nov. 27 at 8 p.m. on the Documentary Channel.