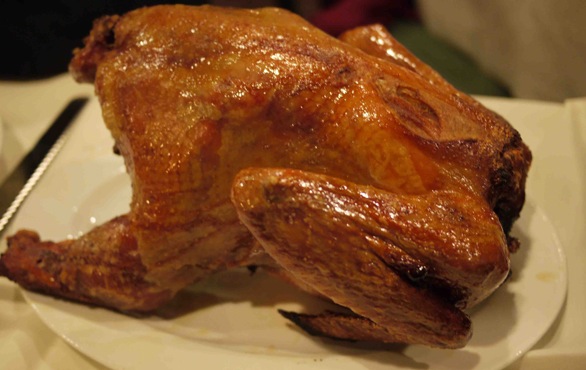 The star of the meal: barbecue turkey

For some, Thanksgiving can be the same every year: turkey, stuffing (the dish and your face), cranberry sauce, pie, family togetherness, etc. But what about mixing it up this year and either taking a trip to pick up some exotic treats or actually eating your traditional meal in Chinatown?

This holiday just might be the perfect time for culinary exploration into traditional and progressive Chinese Thanksgiving cuisine. Recently, I had the immense pleasure of partaking in a feast fit for royalty at Golden City Seafood Restaurant (960 N. Hill St., Los Angeles; 213-253-2660).

The dinner started with a whole roast turkey stuffed with sticky rice, mushrooms and sausage instead of what most of us know to be stuffing. The barbecue turkey is cooked in the traditional barbecue-duck style – brined in a unique soy sauce marinade and roasted, resulting in a crispy on the outside, moist on the inside, sweet and savory turkey.

And then came the side dishes, in no particular order: steamed Santa Barbara prawns, Golden Garlic Bean Curd (with fried garlic pieces everywhere), Bamboo Fungus and Black Mushroom with Snow Pea Leaves, French-style Filet Mignon (too good to be true). One deliciously unique item was the Dried Scallop Winter Melon Soup with assorted meat. Even though we were served roast turkey, we were still treated to Peking Duck, served with bao, scallions and a special sauce to make into little sandwiches.

All in all, this was an amazingly delicious twist on the Thanksgiving meal. If all this sounds too good to miss, you can either pick up a turkey or dine-in at these historic Chinatown establishments below:

For more information, visit chinatownla.com.
Article posted on 11/24/2010
This article has been viewed 1572 times.