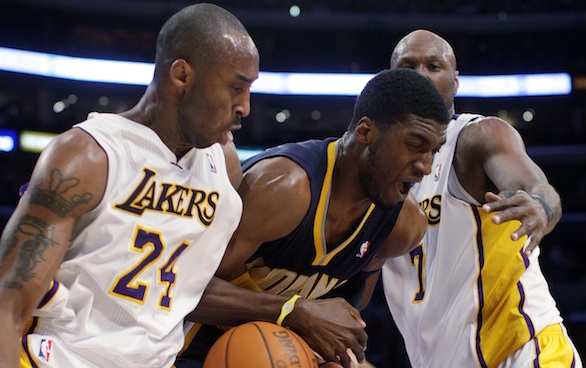 After a wonderful victory over the deep and talented visiting Chicago Bulls Nov. 23, the Lakers lost their mojo en route to suffering two consecutive defeats, one on the road and the other at home.

The Lakers (13-4) held a five-game winning streak before visiting the Jazz in Utah the day after Thanksgiving. Although Los Angeles had a 17-point lead at one point, the Jazz managed to rally back and collect the home win.

At home against the Indiana Pacers on Sunday, Nov. 28, the Lakers found themselves in trouble for the majority of the game. The Lakers boosted their energy and talent levels in the fourth quarter, but it was still short of a comeback bid. Shooting guard Kobe Bryant scored a whopping 41 points, but he could not convert a game-tying three-pointer at two different times with less than 20 seconds remaining.

After the defeat against the Pacers, it is obvious that the Lakers need center Andrew Bynum back on the court. Not only do the Lakers miss Bynum’s big, post-up and defensive presence, but the team needs him back to solidify rest for Pau Gasol and Lamar Odom. Both Gasol and Odom have been playing a lot of minutes thus far this season, and the Lakers truly do not have a back-up for either.

Bynum’s absence was felt against the Bulls even though Los Angeles won 98-91. Bull center Joakim Noah seemed to have his way with 19 points and 13 rebounds.

In the last few minutes of the game, the Lakers’ experience and talent defensively stepped up. That, alone, contributed to the hosts capturing the victory over Chicago.

“They put a lot of pressure on us,” Bulls head coach Tom Thibodeau points out. “The Lakers are a heck of a defensive team. You’ve got to make quick decisions against them; I thought we settled too much for jumpers.”

November is almost over, and the competition in December only gets tougher. Bynum’s return is anxiously awaited.