Bruins Move On to Quarterfinals 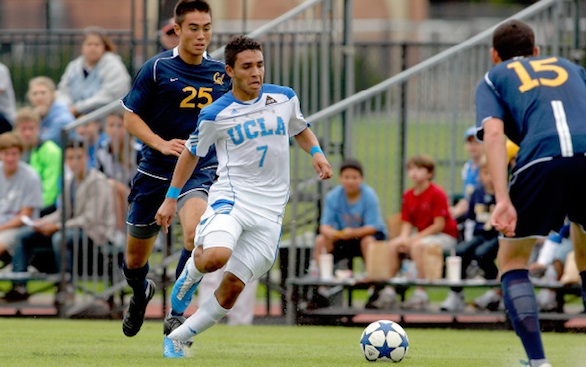 With a thrilling 2-1 double overtime victory over Dartmouth on Sunday, Nov. 28, night at Drake Stadium in Westwood, the UCLA Bruins men’s soccer team advanced to the NCAA Quarterfinals.

“[I feel] excited that we won the game,” Bruins head coach Jorge Salcedo says. “These games from the round of 16 are hard fought matches.”

Two goals from junior left-midfielder Eder Arreola, including the game-winning goal with just eight seconds left before penalty kicks occurred, lifted the Bruins (16-4-1) into a tough match in Kentucky against No. 1-ranked Louisville.

“The last part of our season, he has been very good for us,” Salcedo says of Arreola. “Now, he’s reaping the rewards of his good plays. I am thankful and glad that he is scoring goals.”

A cold night of about 48 degrees did not prevent Arreola from keeping the team’s goal in mind. Arreola began the scoring with 25:55 in the first half from 10 yards out. He received a pass inside the box, trapped it and then fired a well-placed left-footed shot into the upper right corner of the net for his second goal of the year.

“It was a great combination play by Reed playing it to Chandler, who played me through. I took one touch and didn’t hesitate and just hit the ball across,” Arreola comments.

Called the Big Green, Dartmouth did not go out without a fight, tying the affair at one all with 59:34 in the second half as Bryan Giudicelli collected a rebounded shot goal from just outside the goalkeeper box.

UCLA and Dartmouth had chances to seal a victory prior to the end of regulation, but both could not follow through on their opportunities. Arreola then scored in the second period of overtime with 109:52 on the clock after tapping in the ball into the back of the net when a long throw-in managed to reach the box.

“It was unreal. We didn’t think that was going to happen to us,” Arreola says. “But luckily it happened to us in the most important game we’ve had.”

Bruin goalkeeper Brian Rowe made six saves for the game, which featured 18 shots by Dartmouth and 20 from UCLA.

The Louisville Cardinals are the top-seeded squad in this year’s tournament, and they have not lost a game all season long with their 18-0-3 record.

“They are a tough opponent,” Salcedo states of Louisville. “I am sure there is going to be a huge crowd there next week.”

UCLA visits Louisville on Saturday, Dec. 4, at Cardinal Park for a 4 p.m. kickoff for a chance to move on to the semifinals, which will be held at UC Santa Barbara.