Trojans, Bruins Still Have Something To Play For 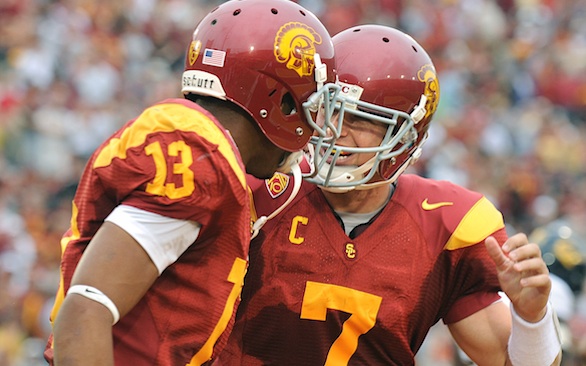 Not much can be said of their respective seasons this year, but both USC and UCLA still have something to play for this coming weekend.

It could be just for another victory in their records. It could even be for bragging rights of who is the best college football team in Los Angeles. Regardless of what anyone says, both programs are playing for pride and respect.

This rivalry goes back years and years. Now, that Lane Kiffin is the head coach of the Trojans, one could argue that it is renewed this season for the mere fact that Kiffin could trash talk this entire week before the affair kicks off.

But Kiffin probably will not do that. Believe it or not, Kiffin is actually doing a good job at coaching the Trojans thus far this season even though the team’s record could indicate otherwise. The fact that the Trojans have struggled at times this season does not portray Kiffin as a bad coach. It simply states that the Pac-10 is a stronger conference now, especially since No. 2-ranked Oregon and No. 4-ranked Stanford, based on the BCS standings, have elevated their games of late.

The Trojans (7-5, 4-4) are still a talented and deep team, but they’ve been in a rebuilding mode since Kiffin arrived. They are looking to defeat the Bruins for pride and respect. Why else? Although the Trojans have won over six games, which is the minimum for bowl eligibility, they cannot participate in any postseason play because of their two-year sanction.

UCLA, on the other hand, has had a disappointing season with their 4-7 overall record, with a 2-6 conference mark. Currently, they sit in ninth place of the Pac-10. Throughout the season, the Bruins showed signs of great light, especially with their wins over Houston and Texas. Yet, some of this season’s losses have been embarrassing. The biggest was at Oregon where they suffered a 60-13 defeat. But the loss to Stanford at home by a score of 35-0 may have hurt more.

Bruin head coach Rick Neuheisel could simply motivate his players to win, and to just win for pride and respect. Therefore, this is definitely going to be one of those games that fans cannot wait to watch. It will be a battle on the field.

And for the Trojans, sophomore quarterback Matt Barkley could lead the attack. After the Trojans experienced a 20-16 home loss to the visiting Notre Dame Fighting Irish, Barkley told reporters that he would definitely play in the rivalry game. Barkley dressed but did not play against Notre Dame due to a sprained left ankle.

In 11 games this season, Barkley has tossed 2,593 passing yards and 25 touchdowns. Of course, he has to play against the Bruins. And he will!

On the rushing end, Marc Tyler has run for 868 yards on 163 rushes, including nine touchdowns. Allen Bradford has contributed 582 yards with four touchdowns on 82 rushes. Moreover, both Robert Woods and Ronald Johnson are solid receivers who can present dilemmas for the tough UCLA defense. Woods has 61 receptions, six touchdowns and 729 receiving yards, while Johnson carries 59 catches with 656 yards and eight touchdowns. The Trojans have a great, balanced attack on the air and the ground, but it is their defense that has struggled more often than the offense. In brief, solid defensive play from either team will probably determine the outcome of the affair.

For the Bruins, it could be uncertain who will play the quarterback role, but that is not going to be a significant factor of the game’s result. This is true because the Bruins are a running team on offense, who rely on their defense to decide games for them at times. Sophomore running back Johnathan Franklin has rushed for 1,018 yards, and he will be looking to add to that total. He has seven touchdowns, too.