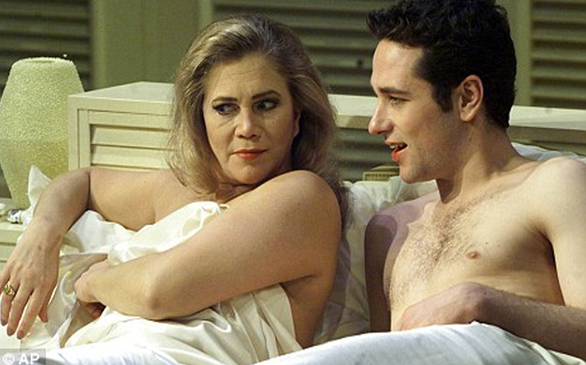 Kathleen Turner and Matthew Rhys in the West End production of “The Graduate”
(Credit: Tina Fineberg)

Here’s to you, Mrs. Robinson. The cult classic novel and 1967 hit film The Graduate is back – this time as a radio theater recording for L.A. Theatre Works. Matthew Rhys (“Brothers & Sisters”) stars as the title character alongside Kathleen Turner, Mrs. Robinson herself.

Rhys and Turner are reuniting 10 years after their run in “The Graduate” in the West End of London. The new adaptation plays at the Skirball for a five-day limited engagement radio theater series.

“I’m excited about it. It’s weird. I was in my young 20s when I played the role before, and I’m now past the point probably of playing a graduate,” says Rhys. “It’s a good thing it’s for radio.”

Rhys is ready to revisit the role while finding fresh ideas for his character. But he admits challenges are presented when replicating iconic characters.

“When something is so immortalized in a film performance, regardless of whether it’s been a book, a play or whatever, it’s very difficult for audiences and even the cast to get away from the fact that it was absolutely spot-on,” says Rhys. “Dustin Hoffman made it his own.”

“So if there are moments where both are similar, so be it, as long as I’m true to the words. It’s difficult to not just get away with it but to serve the script,” tells Rhys.