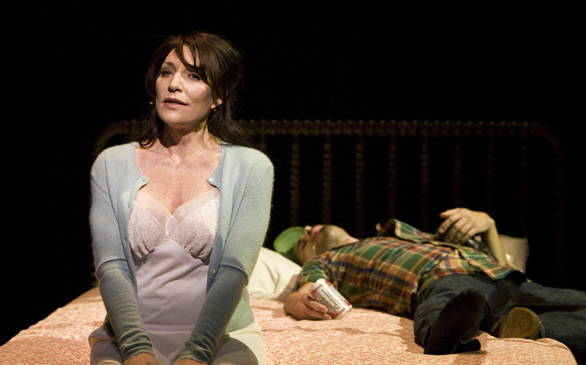 When I heard about the new musical, “Harps and Angels,” my first thought was, “A night of Randy Newman music? Yes, please!” My only concern was how one could be expected to sit quietly and respectfully in the Mark Taper Forum as the cast belted out tunes like “I Love L.A.” and “Short People.” Might they have a sing-along version of the show, I wondered?

Newman is a man of staggering genius and wit, whose music seemed the perfect fit to get the “Movin’ Out” treatment. Which is perhaps why it was so surprising and disappointing to discover the show isn’t a fully realized theatrical experience, but rather a big-budget staging, Night of a Thousand Songs-style, from the Randy Newman catalogue.

Despite his music being intrinsically narrative, the songs are each stand-alone vignettes, sung as sketches rather than strung together to create a compelling plot, which would be a simple task. Sometimes the pieces are an odd, convoluted mess, especially when they’re politically charged, while other times, and quite often in the second act, they have a delightful theatricality, like Storm Large and Ryder Bach’s hilarious version of “You Can Leave Your Hat On.”

The cast, which also includes Katey Sagal (“Sons of Anarchy,” “Married... with Children”) and Michael McKean (Best in Show, This Is Spinal Tap), are a capable bunch, but occasionally their voices seem challenged by the music.

The problem with “Harps and Angels” is you can’t be sure if the show is a musical, a tribute or an investigation into the composer’s psyche. Only one thing is certain, Newman deserves a better monumentalization.