Another Year, Another Fee Increase 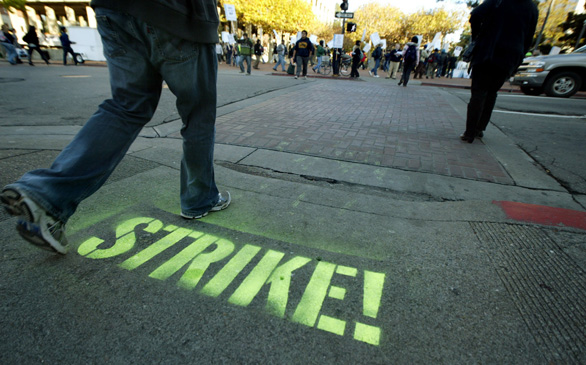 Protests at UC schools occurred yet again this November after another fee increase was announced.
(Credit: Laura A. Oda/Oakland Tribune/MCT)

Last year, the bedeviled number affecting tuition for University of California students was 32. This time last year a 32 percent increase in student fees led to massive protests on top of Covel Commons at UCLA. This year, that number is 8 percent, and although a smaller number, it is just the same – another increase that students can’t bear.

The percentage roughly equals to an increase of $822 for California students and their families. A Nov. 8 meeting of the UC Regents also included expanding the Blue and Gold Opportunity Plan to include a one-year reprieve for the increase for qualified students whose family income totals up to $120,000. The Blue and Gold Opportunity Plan has been championed by UC President Mark G. Yudof who stresses the plan’s aid for lower income students by providing full coverage of systemwide fees to students whose family income is below $70,000. The expansion of the plan this year would hopefully provide help to middle-income families who fall in a specialized grey area of earning just enough to not qualify for financial aid. The trouble is Yudof’s enthusiasm isn’t shared by the thousands of students whose individualized situations keep them from affording a higher education and a full investment in their future.

As many of you know, I fell in to this specialized grey area and am paying over $30,000 in student loans from the four years I attended a UC. Not only that, my parents are also paying their portion of my student loans they received under a Parent PLUS plan. Sometimes I wonder if it would have been better to attend a cheaper college, but it turns out California’s budget deficit is affecting every educational institution from K-12, colleges and universities. The bandwagon to raise student fees has even affected Cal State Universities with an increase of 15 percent by next fall as reported by the Los Angeles Times, roughly translating to students copping $4,884 for a Cal State education.

A main concern for the increase is whether access to higher education for minority students who generally fall within a lower income bracket will be hindered by the fee increases. Apparently this is not so, to a point. In October a study by the University of California titled “Undergraduate Access and Excellence at UC” analyzed admissions and diversity data within all 10 of its schools since 2008 and found a general increase of first-generation, low-income and underrepresented (this includes black, Latino and American Indian) students. At UCLA, the increase for low-income students as reported by the Daily Bruin was a mere half a percent. This increase isn’t enough and is scary considering that opportunities such as the Blue and Gold Plan exist. Just picture a graduating high school senior whose parents work full time looking at a basic UC undergraduate fee of $11,124. It’s enough to scare anybody into not even bothering to look for financial aid or help.

The fact is what the UC Regents is implementing with each year’s tuition increase is extremely hazardous to the health of UCs and toward California’s future. Basically going to a UC is becoming a major turnoff. Even with the help given, the psychological seed is being planted that higher education is just too expensive, and we will have yet to see the true impact of the fee increases on UC enrollment.

Already one consequence is that the UCs are considering limiting the amount of in-state enrollment, opting for the more lucrative tuitions of out-of-state and international students. And I get it, it’s not totally the UC system’s fault for raising fees; there’s a bigger picture involved with California’s growing budget deficit and all types of bureaucratic hullabaloo on spending. But there still remains the 8 percent. No matter who or what’s at fault, the repercussions on individual students and future students and their families are dire. No one wants to pay off loans after they graduate, especially in the thousands of dollars. Middle-income students and families are the ones getting wringed out.

It’s no wonder students are screaming, getting arrested and protesting their hearts out. One reply on an Los Angeles Times blog likens it to whining, saying, “They care about their education so much that they’d rather violently protest having to pay more for it than attend class.”

But what else is a student to do when magically all these percentage increases show up on their college tab?