The Kids Are All Right and More 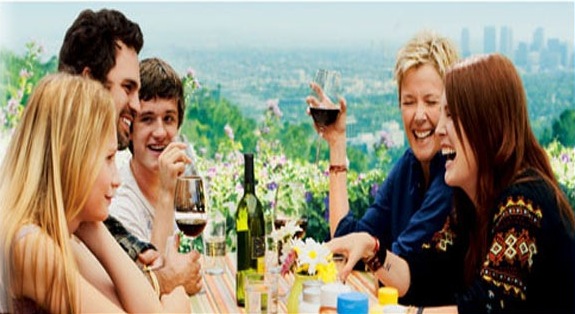 Funny Business: Annette Bening and Julianne Moore star as a committed lesbian couple whose children want to meet their birth father (Mark Ruffalo) in The Kids Are All Right.

Bow Wow just won the lottery. Now he just has to survive a weekend in the projects after his neighbors find out in Lottery Ticket.

In Toon: Join everyone’s favorite mystery-solving dog and the gang in Scooby-Do, Where Are You!: The Complete Series. This set contains 16 hours of the classic cartoon and comes in a replica of the mystery van. Jinkies!

The Idiotbox: Before the remake hits theaters, check out the original ’70s TV classic The Six Million Dollar Man: The Complete Series. When test pilot Steve Austin is paralyzed, the government rebuilds him with cybernetic parts, granting him superhuman strength. Lee Majors stars.

One of the greatest shows in TV history, The Twilight Zone: Season 2 looks better than ever on Blu-ray. This season features classic episodes like “Eye of the Beholder,” “The Invaders” and “Long Distance Call.”

Thirty-five years since it initially aired, the epic documentary series The World at War remains one of the definitive statements on WWII. Now this stunning, heartbreaking series comes to Blu-ray. Laurence Olivier narrates.

The Fugitive: The Fourth Season, Vol. One is the final season of the classic series.

Raymond Burr is the epitome of a defense attorney in Perry Mason: Season Five, Vol. 2.

Under the Radar: Metropia is a highly original animated film about a dystopian future where subway lines connect all of Europe and one man who hears voices.

Exam is a tense psychological thriller about eight ambitious people and how far they will go for an in-demand corporate job.

Ed Harris stars as a white supremacist in the crime drama Once Fallen.

The Vault: Clark Gable and Charles Laughton star in the original Mutiny on the Bounty (1935) now on Blu-ray. Also included is a newsreel from the Academy Awards where the film won Best Picture and garnered Best Actor nominations for its two leads.

Cult black comedy Pretty Maids All in a Row is by far the weirdest film Rock Hudson ever made. Hudson plays a ladies’ man high school coach who starts murdering his underage mistresses. Angie Dickinson co-stars.

Lee Marvin and Jack Palance star in the end-of-the-west western Monte Walsh (1970). Marvin gives one of his best performances as the last of a dying breed.

Stranger Than Fiction: Classic surfing documentary The Endless Summer comes to DVD in a new Director’s Special Edition. The two-disc set features remastered picture and sound to look better than ever as two California surfers travel the world in search of the perfect wave.

Countdown to Zero is a frightening documentary that traces the history and escalation of the nuclear arms race.

Best Worst Movie is a fun tribute to cult favorite Troll 2 directed by none other than the film’s child star, Michael Paul Stephenson.