Black Swan: Natalie Portman (finally) gets to use her Harvard degree. 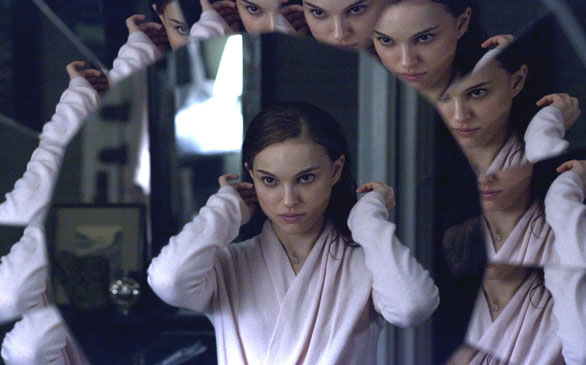 In Black Swan, Darren Aronofsky’s new psychological thriller, Natalie Portman plays Nina, a young ballerina unraveling as she prepares to dance both the pristine, pure white swan and the manipulative, seductive black swan in “Swan Lake.” As the film’s director and star make their way into the lobby of the Pantages, a palatial art deco RKO movie house-turned-theater, their own white swan/black swan dynamic is evident.

Portman, long beloved by audiences and critics alike, enters looking poised and regal in an indigo dress, a warm smile captivating all who behold her. Just behind her is Aronofsky (Pi, Requiem for a Dream, The Wrestler), a director who has earned the reputation of being a gifted but difficult genius, swaddled in a sport coat, a long scarf circling his neck and a 1970s cop mustache winking ironically from his upper lip. They are the yin to each other’s yang.

Sitting down to discuss their new project, Portman happily takes the back seat when asked how the two came together on the project, differing to Aronofsky who charges forward, all pistons firing.

“I’ve been a fan of Natalie’s since I saw her in The Professional and it turns out her manager is an old friend of mine from college, so I had an inside line to meet her,” the director begins excitedly. “We met in Times Square, at the old Howard Johnson’s, had a really bad cup of coffee. I had early ideas about the film, but she says I had the entire film in my head, which is a complete lie.”

“No, it was so close to what you described to me,” Portman pipes up, offering Aronofsky a beaming smile of reassurance.

“We talked a bit about it, and we started to develop it, but getting into the ballet world proved to be extremely challenging,” Aronofsky continues. “Most times when you do a movie and say, ‘I want to make a movie about your world,’ all the doors open up. The ballet world wasn’t at all interested in us hanging out. It took a lot of years to put it together.”

Portman says there were a number of reasons she wanted to do the film but Aronofsky’s involvement solidified her interest, something the director still can’t believe.

“I think I’m way too direct and have scared away a lot of A-list actors in my career,” he admits candidly. “In fact, Natalie Portman is the first A-list actor I’ve worked with. Everyone else was like, ‘You want me to do what? For how long? For how little money?’ And they walk away. I’ve lost a lot of movie stars along the way because I’m a little too straightforward.”

Besides working with Aronoskfy, whom she says she “would do anything for,” Portman loved the idea of doing a dance movie, having taken classes when she was a young girl, but the role also gave her the opportunity to use the psychology degree she earned from Harvard in 2003 in order to understand some of her character’s destructive behaviors.

“This was a case where something I learned in school did translate into something practical, which is very, very rare,” Portman admits with a chuckle. “[Nina] was absolutely a case of obsessive compulsive behavior. Ballet really lends itself to [OCD] because there’s such a sense of ritual.”

In order to embody her character, Portman had to subject herself to a similar physical ritual that involved six to eight hours of training a day, ranging from toning to swimming to ballet, a process she says was the best possible insight into Nina.

“The physical discipline really helped the emotional side of the character, because you get the sense of this monastic lifestyle of only working out, which is a dancer’s life,” Portman explains. “You don’t drink, you don’t go out with your friends, you don’t have much food, you are constantly putting your body through extreme pain. You get the understanding of the self-flagellation of a ballet dancer. It is a devotional, ritualistic art, which you can relate to as an actor. When you do a film, you submit to your director in the same way. Your director is everything, and you devote yourself to create their vision. I’m not a perfectionist, but I’m obedient. I think it’s important to work your hardest and be as kind as possible to everyone you work with.”