The Assistants: Everyone started somewhere. 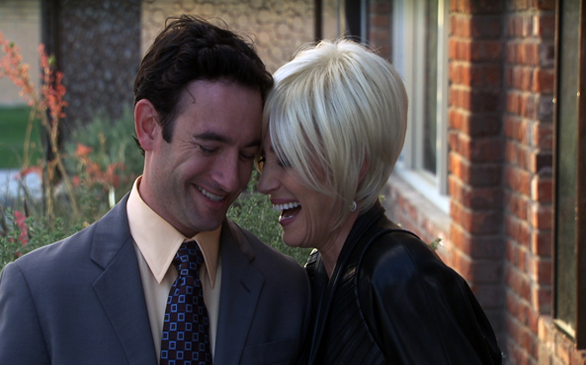 A group of Hollywood assistants – 20-something wannabe actors, writers, directors, craftsmen – use their positions to lie, con and blackmail their way into producing their own movie. Here, the real people behind the players sound off about the state of affairs in Hollywood.

This is a “funny” movie with grains of truth. What did you find especially truthful?

Steve Morris (writer/director/producer/editor/distributor): I’m not sure if it’s a funny movie with grains of truth or a true movie, which is sometimes funny. For me, coming to Hollywood has been a long education in the reality that truth is almost always stranger than fiction. We work in an absolutely ridiculous industry, filled with bigger-than-life characters and those characters are often self involved, greedy, vain and even cruel, but they also can have great passion, intelligence and occasionally even kindness. The goal was not to sometimes show a funny world and at other times a true one, but rather to show a world that was both funny and true at the same time.

Reiko Aylesworth (one of the better-known “assistants”): I was struck by the truthful depiction of the struggles that people face in maintaining friendships, ethics and ideals as they start out in the world. In this story, it’s the entertainment industry but so much of it is universal.

Have you personally experienced anything that happens in the film?

Morris: Like anyone trying to make their way in this town, I have my share of battle stories and the scars that go with them. However, while the movie itself is about young people going after their dreams in Hollywood, in many ways, I think everyone can relate to that moment in life when you realize that it’s time to either settle for what life is handing you or risk everything on one last shot at your dreams.

Did the film change the way you feel about Hollywood and the filmmaking business?

Morris: Fighting to make your way in Hollywood can depress even the most stubborn optimist, but the process of making this film reaffirmed that most people in this town simply want to work on projects that they can believe in, and if they are treated with respect they can be as kind, generous and dedicated as anyone in the world.

Do you think Hollywood can change?

Morris: Personally, I think Hollywood has to change. Not simply because it is often wasteful, fickle, foolish and cruel but also because it too often fails to deliver either beautiful art or profitable business. There is simply far too much competition for our attention for Hollywood to continue doing things the same old way. It will have to change or die trying.

Do you think most people in Hollywood are good people who do bad things, or bad people?

Aylesworth: I don’t know. There IS a level of desperation I haven’t felt anywhere else.

Morris: To be honest, I reject the premise that people are either one thing or another, good or bad. People are just people; ambitious, lost, lonely, prideful, petrified. Very few people think of themselves as “bad” and most of them can give very strong rationalizations about why they did what they did. Our job both as filmmakers and sometimes even as audience members isn’t to judge them but rather to try to understand them.

Douglas: I think most people are good and do bad things everywhere, but in Hollywood the bad things make headlines.?

What would you like people to take away from the film?

Morris: For me, the film has many messages. However, if I wanted an audience to take one thing away, it’s probably the opening line of the movie. “The thing you have to remember is, ‘It’s your life. You’re the one in charge.’”

Aylesworth: I hope people can have a laugh at and see the flaws in the people who seemingly control their lives and hold all the power. So much of it is smoke and mirrors. Of course, it’s Hollywood.

Was The Assistants fun to film?

Douglas: It was a blast. Jane [Seymour] is out of control. Aaron [Himelstein] makes me laugh almost as much as I make me laugh.

Morris: Directing a movie is grueling, stressful, overwhelming and terrifying, and I loved every single minute of it.

Interviews
Mary McNamara: After losing a child, 'Pieces of a Woman' filmmakers channeled their grief into art
54 views

Interviews
Ai Weiwei on activism in the US, his art response to COVID-19 and a secret Wuhan film
775 views