The Warrior’s Way: Kate Bosworth takes a stab at westerns. 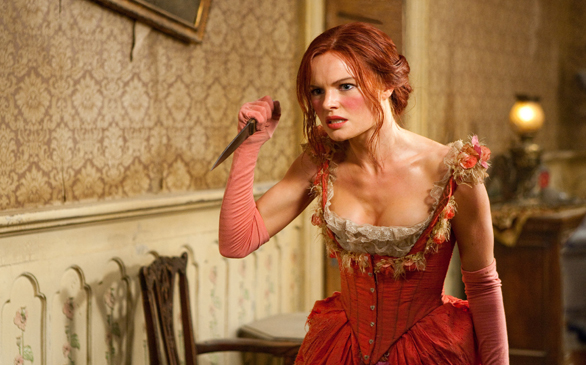 In recent years, Korean cinema has seen a boom in what might seem an unlikely genre; the ninja-cowboy picture. But westerns have a longstanding tradition in Korean filmmaking, dating back to the 1960s and ’70s, with movies like Shin Sang-ok’s The Homeless Wanderer (Musukja), a Korean version of Shane, and Six Terminators (Yugin-ui nanpogja) by Gweon Yeong-sun, which takes after The Magnificent Seven. Following on the heels of 2008’s brilliant Ji-woon Kim film, The Good, the Bad, the Weird, and the news that the Cowboy Ninja Viking comics would be adapted by Zombieland scribes Paul Wernick and Rhett Reese for Disney, The Warrior’s Way finds its way to theaters after 11 years in development.

Written and directed by first-timer Sngmoo Lee, the movie follows the greatest warrior-assassin in the world (Korean star Jang Dong-gun), hiding out in a Dust Bowl circus town in the American Badlands after refusing to kill the last surviving member of his sworn enemy’s clan, an adorable baby girl he adopts instead. Playing his love interest, an aspiring knife thrower named Lynne, is Kate Bosworth, sporting a thick Southern twang and a head of fiery red hair.

Her hair returned to its corn silk blonde glory, wearing a royal blue tiered dress and stacked silver bracelets from her new venture, Jewelmint.com (a subscription-based jewelry line she started with celebrity stylist Cher Coulter), Bosworth glides into a ballroom at the Beverly Hilton to discuss her first film since 2008’s 21.

When asked why she was drawn to the role, Bosworth says, “There [are] so few good opportunities out there and even fewer for females. For me, it’s about what’s interesting and unique; what terrifies me a little bit to push me and allow me to learn and grow and be better. This was out in the stratosphere, unlike anything I’d ever read.”

Inhabiting a character she describes as “wild and feral,” Bosworth needed her portrayal to stand up in a world of warriors, carnies and gunslingers.

“Because the script was bold and all the characters were bold, I didn’t want to be ‘The Girl,’” Bosworth explains. “[Lynne] was raised by this band of misfits; she’s going to be rough and fierce. One of the moments when I found my character was in costume fittings. We didn’t have shoes figured out yet, but [the costume designer] said, ‘Just try on those shoes for shape. They’re men’s shoes.’ And I put them on and I said, ‘I’m wearing these.’ They were like four sizes too big but they had this clomping, boyish effect, a floppy quality and lack of refinement that clicked in that moment.”

But the wardrobe was just one small part of the equation. For Bosworth, the film’s intense Crouching Tiger-in-the-Wild West style was incredibly challenging. She says that from the moment she landed in Auckland, New Zealand, where the film was shot on a massive green screen soundstage, she went straight into training.

“I wanted to jump in immediately because I’d never taken any kind of martial arts and was completely unfamiliar with it,” she explains. “It reminded me of the training in Blue Crush when I’d never touched a surf board.”

Bosworth reveals it was less about handling weaponry than the physical demand of something as seemingly simple as turning, which tested her limits.

“When you have a sword in your hand and you have to swing around and then center yourself and move the other way, it’s so much harder than you think,” she says emphatically. “It seems so simple and then you try it. It’s really hard! I wish I’d had more of a background in dance. I took ballet a little last year and I thought, ‘Oh, God, this would’ve been so useful when I shot this movie,’ because it’s so much about an inner core strength and a certain balance you have to have. I don’t know that I’m the most coordinated person on the planet, so it was about honing that.”

Asked what skills she was taking away from the role, Bosworth laughs.

“I think I’ve sort of forgotten everything,” she smiles. “Yeah, I haven’t really kept up with the whole knife throwing, knife fighting thing. It’s like how I haven’t surfed in so long too. When surfers come up to me and they’re so excited, I feel like I’ve really let them down and say, ‘I’m sorry!’ It’s so disappointing! But I did at the time. I was so into it!”