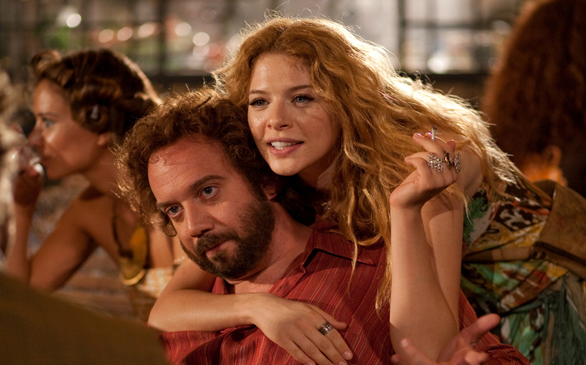 Part comedy, part drama and all art house, Barney’s Version is a worthwhile little film that boasts an amazing cast, rich characters and a heart-tugging storyline.

The film stars the always-amazing Paul Giamatti in the titular role of Barney Panofsky, an offbeat, somewhat acerbic guy navigating his way through life and love over the course of several decades.

When we first meet Barney, he’s a 30-something guy living in Rome, Italy, surrounded by artistic friends and engaged to a pretty – if not demanding – woman named Clara (Rachelle Lefevre, best known for playing fiery haired vampire baddie Victoria in the first two Twilight films). Barney has supposedly gotten her pregnant and, in good-boy nature, has decided to marry her. When we find out she’s lied about him being the father and soon after commits suicide, though, Barney is swiftly plunged into the next chapter – and meets the next woman – in his animated life.

After leaving Rome for Montreal with the promise of a job, he is introduced to a statuesque and wealthy Jewish gal (Minnie Driver) at a friend’s party. She and Barney date for a bit, and, before long, they’re engaged. While things seem fine at first, Barney’s true schlub nature comes out on his wedding day, when this cigar-smoking, super-blunt, often foul-mouthed guy meets Miriam (Rosamund Pike, An Education), a guest at the reception, and asks her out on a date.

It is at this point in Barney’s life that we begin to wonder how TWO beautiful women have fallen for this guy; however, we think it’s sweet that, even though he is still married – and now in a vile relationship – he continues to pursue Miriam via sporadic phone calls and a standing order for roses. Yes, he is definitely a schmuck; but, in some way – owed to the multifaceted nature of Giamatti’s performance – still somewhat endearing and respectful.

After Barney finally wins over Miriam, the film settles into its long main stretch, where we see the relationship grow – and eventually begin to crumble – between these two people. Again, it’s due mainly to Giamatti’s performance that we continue to root for Barney, even though he’s clearly despicable in many ways.

The supporting players are good, too, including Driver and Pike as well as Dustin Hoffman as Barney’s father, Izzy, and Scott Speedman (Underworld, “Felicity”) as Barney’s drug addict best friend, Boogie. The direction by Richard J. Lewis proves both peaceful and well paced, combining all of Barney’s adventures and marriages with an intriguing murder mystery involving him and Boogie. This is impressive, as Lewis’ main credits are a plethora of “CSI” episodes and a K-9 sequel.