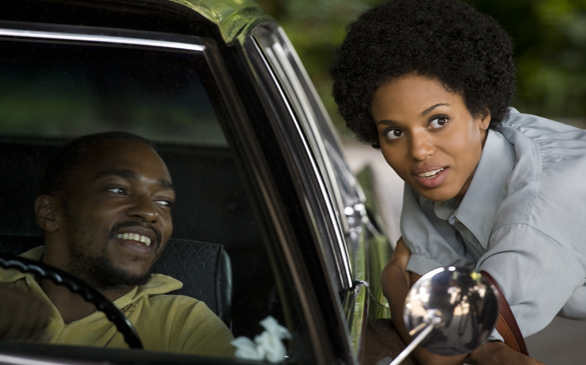 The politics of the ’60s resurface in director Tanya Hamilton’s debut feature film, which tackles the emotionally charged subject of racism and oppression.

In Night Catches Us, Anthony Mackie (The Hurt Locker) plays Marcus, an ostracized ex-Black Panther who returns to his hometown of Philadelphia after a mysterious absence. The year is 1976 and Marcus is back for the funeral of his father. Unfortunately, not only does his brother Bostic (Tariq Trotter) think that he’s an irresponsible absconder who abandoned his family, the rumor in the neighborhood is that he snitched on one of his ex-Panther buddies to the FBI and thus, his return isn’t met with any fanfare.

Once word spreads of his return, Marcus quickly finds himself at odds with former members of the Panther organization as hostility and resentment festers in the neighborhood. When he moves in with his only ally, Patty (Kerry Washington), a former Black Panther comrade, and her daughter Iris (Jamara Griffin), the hostility combined with the explosive secret his return threatens to unveil sets everyone on edge. As the friction between the white police who patrol the Philadelphia neighborhood and the African Americans who live there escalates, the stability of the entire community is threatened.

Amari Cheatom plays Patty’s cousin Jimmy, who intends to recreate the violent protest of the Panthers against the police. And Wendell Pierce is David Gordon, the local detective and the only other person besides Marcus who knows the whole truth about the past.

Hamilton gets the best from established thespians Mackie and Washington, who are engaging to watch as they deliver smoldering performances as the Afro-wearing, former gun-toting African-American revolutionaries. She also vividly portrays the reign of terror by the white police in black communities with great imagery.

The cinematography, the pungent period details and a funky score by the Roots are all brilliant, but the problem with Night Catches Us is ambiguity. It appears scattered with several thoughts and stories at play as it floats between being a love story and a revolutionary tale, sprinkled with a little history lesson. The buildup is exceedingly slow as the story tries to weave together its several characters, and by the time anything has actually happened, it’s almost at the end of its 88-minute running time.