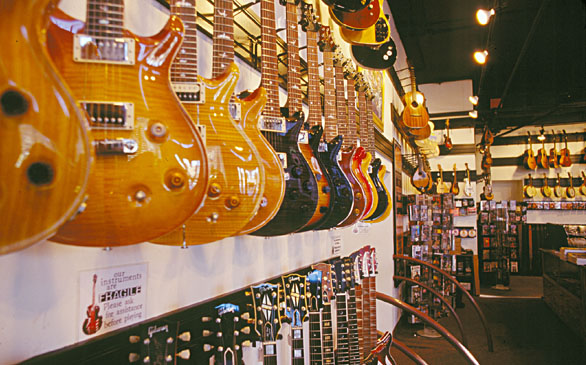 Watching Kings of Leon frontman Caleb Followill, dressed in head-to-toe denim and attended by a single nonchalant bodyguard, slink into an auditorium that’s modestly hitting 20 percent capacity where he will discuss his rise to fame, from an acoustic performance just a few miles away at the Bluebird Cafe (4104 Hillsboro Pike; bluebirdcafe.com) to a show at Madison Square Garden that sold out in four and a half seconds, you realize this is the perfect example of what makes Nashville special.

Relaxed and unassuming but brimming with talent and alluring beauty, Followill is the human embodiment of the city he once called home.

Nashville has long been to country music what Hollywood is to aspiring screen starlets or Broadway to belting babes; every waiter is a songwriter with a demo in their back pocket. “There’s a lot of buzz in this town,” the locals say, “and you learn to never say never.”

But in recent years, thanks in part to the success of Kings of Leon, pop-crossover Taylor Swift and the city’s current darling Jack White, whose relocation from Detroit validated the city as a thriving creative center with a serious rock scene, Nashville has lost the bedazzled, big-haired, country stigma it once carried and has been reborn as “Music City.”

With music pouring out of over 200 venues across the city, even the walk signs are melodic. Seriously. Each is embedded with an MP3 player that’s programmed to play music suitable to different neighborhoods, so when you’re by the symphony, you hear classical versus near the Opry where you hear country.

Still, no matter how much the music scene in Nashville evolves, the city’s roots are firmly planted in country and nowhere is that history paid greater honor than the Country Music Hall of Fame (222 Fifth Ave.; countrymusichalloffame.com) where Dolly Parton’s handwritten “Jolene” lyrics, along with the back story of her inspiration for the song, are enshrined next to Taylor Swift’s home videos, Elvis’ gold leaf-covered Cadillac, taxidermied squirrels shot and mounted by Hank Williams Sr. to resemble his band and walls of best-selling records, costumes, guitars and archival videos. Moving from the earliest recordings to videos currently airing on CMT, the Hall of Fame is a testament to the city’s unofficial theme song, quoted on the walls of the Hall; “May the Circle Be Unbroken.”

Another pillar of Nashville’s musical history is on display, and for sale, at Gruhn Guitars (400 Broadway; gruhn.com). After “forty and three-fourths” years in business, owner George Gruhn’s obsession with certified and refurbished vintage guitars hasn’t wavered one iota. His “adoption agency for guitars” includes fans like Eric Clapton and Robert Plant, who happily splash down $100,000 to $200,000 for items like a pristinely restored Les Paul Sunburst.

Taking a break from Music City’s auditory enjoyments, you’ll find incredible art of the visual nature as well. The Frist Center for the Visual Arts (919 Broadway; fristcenter.org), which is free to anyone 18 or younger, is as much about the architecture as it is the art housed inside. In 1933, President Hoover allocated $500 million to build post offices as a symbol of America’s rehabilitation after the Great Depression. One of the buildings that money funded is the Frist, a pristine example of art deco architecture that became a 24,000-square-foot art exhibition facility in 2001.

On a smaller more indie scale, the Fifth Street Art District (which is more a block than a real district) hosts the First Saturday Gallery Crawl every month. For anyone used to Downtown Los Angeles’ monthly ArtWalk, this crawl can seem downright provincial, with a half-dozen galleries tucked between a Woolworth’s and a snoozy arcade, but it houses some real standout artists, especially John Hung Ha (johnhungha.com), a recent Brooklyn transplant whose feng shui-inspired work has a Run-DMC influence one might not expect to find in a Southern capitol.

Similarly, who would guess that some of the best Thai food you’ll eat this side of Chiang Mai can be found at the International Market and Restaurant (2010 Belmont Blvd.)? Owned by Patti Myint, whose son Arnold appeared on the last season of “Top Chef,” two dollars will buy you coconut milk-laced chicken green curry and sticky rice or a plate of potently spiced rice noodles studded with bamboo shoots and bean sprouts. It’s the perfect place to grab a package of Hello Panda, crack open a can of roasted coconut water and scribble some lyrics about your woman leaving you but taking the dog or your sex being on fire.

Travel
Want a camping reservation in California? Try this
130 views

Travel
Fast forward to summer with these beachy adventures
97 views

Travel
If it’s Tuesday, this must be Berkeley: My family’s weird COVID-era college tour
142 views