Over the Rhine: Nov. 12 @ The Troubadour 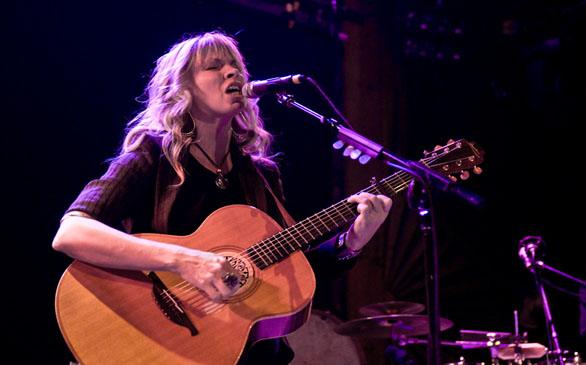 Ohio-based Over the Rhine had flown under my radar until quite recently. Being from back east myself, I have friends that had been fans for quite some time. One such friend decided to make the trek from Ohio to Los Angeles for the show at the Troubador. I can say with confidence that she found the trip worth her while and a dream to see a favorite band in Hollywood come true.

While flying across the country may be a bit extreme, I will say that their fan base is incredibly loyal and that is well deserved. Their set was a mix of low-key, melancholy songs with great meaning and comedic, ice-breaking audience interactions with a few tongue-in-cheek songs.

The band, consisting of duo Linford Detweiler and Karin Bergquist, is currently touring the nation in support of their soon-to-be-released album, The Long Surrender, due in January. During their set and encore they performed some of their new songs, which were very well received by the audience.

With opening singers, including the iconic Lucy and Loudon Wainwright III, the show started out comedically musical and very light.

For a quieter night out in your favorite intimate venue, this band would be a top choice, and I have to say they would be perfect for a date night.