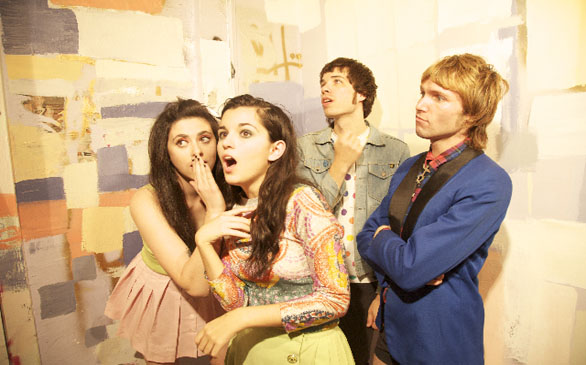 “If everyone around us was making short, sweet pop songs we would probably make intricate arabesques of sonic intensity, but it’s the opposite,” says Hennessey. “Everyone else is doing beautiful, interesting, conceptual music, so we’re gonna do something completely different.”

The band, also including Anders Christiansen on bass and Olivia Alminiana on drums, releases their first single “I Don’t Want Anybody That Wants Me” on Dec. 14 and has an EP in the works for release in early spring.

After much success across the pond in London, Red Bull Music Academy Culture Clash makes its U.S. debut in Los Angeles Dec. 2 at Exchange L.A. Four Los Angeles-based but internationally known and well-respected music collectives participate and battle to be named winner by the crowd. The collectives are Dim Mak, Dub Club, Smog and Stones Throw.

True to a traditional Jamaican sound clash, each collective brings in their own sound system and sets up shop on one of four individual stages and perform four rounds of 15-minute sets. Crowd applause, measured by a decibel meter, determines the winner.

VH1 Classic debuted a new program called “Rock ’N’ Roll Fantasy Camp” last October, and the show turned out to be the most-watched series premiere in network history. Now they’re looking for people who want to participate in future fantasy camps, including one that takes place Feb. 17 to 20 at the Atlantis Resort on Paradise Island in the Bahamas.

Camp “counselors” for that event include Tommy Lee of Mötley Crüe, Ace Frehley of Kiss and Runaways guitarist Lita Ford. The whole idea is to turn amateurs into rock stars through a process that includes over 10 hours a day jamming in-studio, creating original music under the guidance of the counselors and meeting with industry insiders. The whole shebang culminates with a live campers-and-counselors jam, also set to feature Rudy Sarzo of Quiet Riot, Kip Winger of Winger, Alan White of Yes and George Lynch of Dokken. For pricing and other details, visit RockCamp.com.

Badly Drawn Boy Gives It Away

Damon Gough, better known as Badly Drawn Boy, is giving away album track “This Electric” along with remix versions by Beats for Beginners and El Diablo’s Social Club for the price of an e-mail. To get the free songs all you have to do is enter your e-mail address at BadlyDrawnBoy.co.uk. BDB must agree with the old adage that good things come in threes because he’s also in the midst of recording and releasing a trilogy of albums called It’s What I’m Thinking, the first of which, Part 1: Photographing Snowflakes is out now. Of live shows, though, there’ll only be two; Badly Drawn Boy appears at the Troubadour Dec. 15 and 16.

After releasing a string of highly acclaimed solo albums and working on the soundtracks to the films Amélie and Good Bye, Lenin! Yann Tiersen has shifted gears slightly to a more modern sound for his recently released effort, Dust Lane.

Incorporating elements of prog-rock, post punk and atmospheric post rock, Tiersen says the album is “a journey on the dusty lane that leads us to death. Not a sad thing, but like a colorful, sometimes painful but mostly joyful experience: life!”

Dust Lane is Tiersen’s first solo album in five years and his first for Anti-, and you can hear him play the new music at a special show at the Luckman Fine Arts Complex at CSULA Jan. 29.