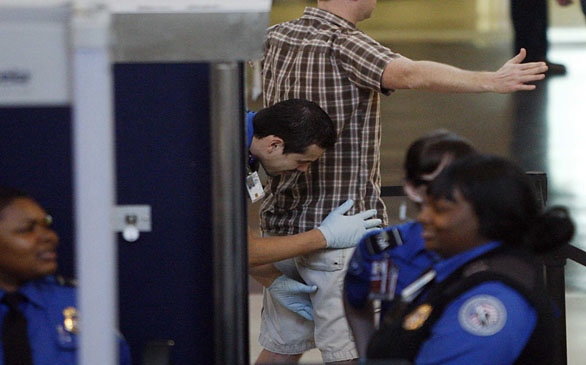 A TSA officer pats down an airline passenger after passing through a metal detector at LAX.
(Credit: Luis Sinco/Los Angeles Times/MCT)

In early November, TSA officials stopped a 61-year-old traveler by the name of Thomas Sawyer while he waited to board a flight to Florida. The man is a bladder cancer survivor and because of his condition, had to wear special equipment to collect his urine. Screening detectors at Detroit Metro Airport (where his flight was departing) discovered the equipment, and Sawyer was quickly whisked off to a private screening. While in the office, Sawyer asserts that the TSA officials were less than kind to him. The end result is that they allegedly paid no attention to his repeated requests for special treatment, resulting in his having to board his flight soaked in his own urine.

Longtime critics of airport security measures are not the least bit surprised by Sawyer’s ordeal. Ever since the tragedy of Sept. 11, 2001, extreme measures have been taken to keep Americans safe in the friendly skies. But when international and domestic safety usurps other civil rights, is it really worth it?

According to CBS News, Americans are quickly losing faith in the system. Aside from annoying sensors, there is the added frustration of racial profiling. This act occurs when an official stereotypes a passenger of a particular racial background and uses this assumption to impart strict but temporary investigation of the individual. Many members of the Arab and Muslim communities in the United States have cried foul when it comes to being stopped and interrogated at flight terminals and checkpoints. This led to the Transportation Security Administration implementing guidelines in accordance with basic human rights, such as females being examined by other females and random searches of people numerically.

But as this holiday season gets under way, scandal is the word on everyone's lips. Men and women booking airplane travel are now looking for the best ways to stave off uninvited attention from officials. There are a few rules – old and new – to remember. First, arrive at the airport at least one hour before a domestic flight is scheduled to depart. This gives you and your party ample time to check-in and pass through security. If flying internationally, two hours in advance is a good rule for arrival to the airport.

Next, pack smart. Again, no traveler is allowed more than three ounces of any particular fluid, such as lotion or soap, carried in a clear plastic bag (like a Ziploc). Women should remove jewelry and even bobby pins from hairstyles to ensure that security alarms and hand wands do not sound when waved over various parts of the body.

Do not pack drugs or alcohol. These items are sure to get you investigated and in some cases, arrested. If arriving or departing during the Christmas or Hanukkah seasons, leave all gifts unwrapped so that you will not be forced to remove paper while going through checkpoints.

If selected to receive a pat down (like Sawyer), there are also things to keep in mind. You have rights where this process is concerned. You may request your search be conducted privately. You are also allowed a detailed explanation of what is happening. Explain to the official on hand if you have any medical equipment, such as a stoma, that might require special treatment.

Always have your boarding pass and identification at the ready, but stored safely so that it does not fall out of pockets. Quickly empty your pockets upon request for the proper officials and never exchange angry words with TSA workers. Not only will this slow down long lines, but it may alert you as a possible threat risk. Remember, these employees have, in some cases, been on the job for long hours.

In the event that you feel you have been victimized in any way, calmly get the name (and badge number if applicable) of the officer, make note of the date and time, then call (866) 289-9673 (the TSA’s new whistleblower line). Travelers are encouraged to file the complaint as soon as possible. For up to the minute changes in travel rules and regulations, it’s also a good idea to visit TSA.gov.