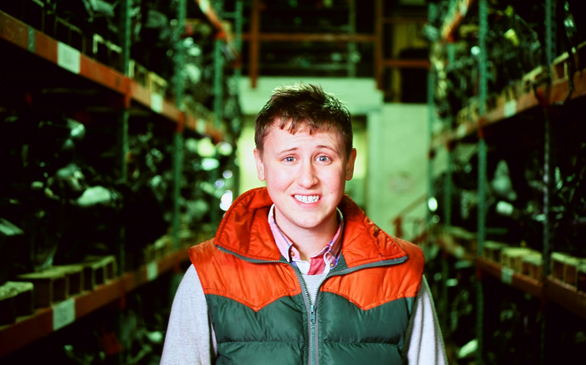 Comedian Johnny Pemberton has hit the road in MTV’s new show, “Megadrive.” Car chases, killer stunts, explosions and smarting off are what to expect.

Pemberton travels the country on the show to mess up cars and meet interesting people.

“None of it’s scripted, but obviously, stunts are planned,” says Pemberton. “I have the freedom to talk to those people. I’m a comedian, that’s what I do. A horse gallops; I make jokes.”

Each episode has three different vehicles involved in some way. And at the beginning of each show, they blow up a tiny car.

“That happens in a lot of different ways. It’s very fun to watch. They just drag me around the country and torture me,” he tells. “I’m doing all of the stunts really, which is kind of scary. I don’t have a stuntman. I did have a stuntman, but he doesn’t look anything like me. He weighs about 150 pounds more than me. It was kind of a joke on one of the episodes.”

Pemberton says there were only a few restrictions on stunts with the Army and the SWAT team.

“I just wasn’t able physically. There’s only certain things they’ll allow you to do,” he explains.

Pemberton thinks his lack of driving experience is what makes the show.

“I’m not a professional driver,” he says. “I don’t have any idea what I’m doing. So that’s kind of the structure of the show is that the person like me who is only good at smarting off to people is doing things you’re really not supposed to do with these vehicles. It’s just me and whoever the driver or engineer is. So it’s constantly changing buddy cop except I’m always Mel Gibson. It’s absolutely a different thing than I’ve ever done or ever will do. It’s a totally unique experience.”

So how does a stand-up comedian audition to become a professional driver?

“They blindfolded me and showed me this piñata and a bunch of car keys,” he says. “And that was it.”

“Then they asked my middle name and took my social security number. It was just sort of a normal audition process. It was kind of boring actually, the whole audition process,” jokes Pemberton.

The show began filming in the fall and will last a total of five months.

“I’m stoked. I’m very excited. It’s been a long time coming so [it’s] nice to see the insane amount of work and traveling work, sweat and tears come into fruition,” he says.

Pemberton’s new action-packed and comedic show isn’t all he’s been up to. He recently appeared as Craig on a couple of episodes of “It’s Always Sunny in Philadelphia.”

“That’s been one of my favorite shows since it first premiered,” tells Pemberton. “So I’ve been watching it, [and to] now be a part of that show is great.”

“Everyone who works on that show is brilliant. They’re absolutely hilarious and super professional. It’s just nice to see a show that is so finely tuned and works so perfectly. It was great to be part of that equation,” boasts Pemberton.

“It’s interesting because when they shoot the show they take their time and throw in a lot of things and really find something funny even if it’s off the script,” explains Pemberton. “That’s really fun to be a part of that.”

“It was a great process,” he continues. “The possibility of a return would be very slim. I would love it, but I’m not going to put money on that.”

Pemberton also is currently working on an unknown project for the Tim & Eric comedy universe.

“We’re working on a thing together that people will find out about eventually,” he says.

He also has a mini-series being released for Xbox Live. The show is about your everyday undercover hitman in high school.

Pemberton will also continue doing stand up around SoCal. He has upcoming local performances around Los Angeles, or what he refers to as “the birthplace of mediocrity.”