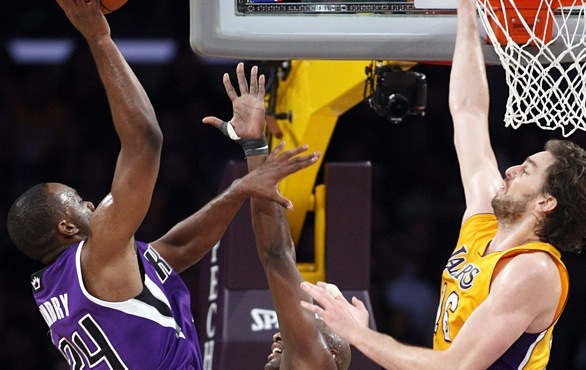 After suffering four consecutive defeats, the Los Angeles Lakers came home and ended that streak against the visiting Sacramento Kings in serious fashion. How serious? Well, the Lakers won the game 113-80.

The Lakers are in search of their playing groove, which was prominently carried in the first few games of the season. They no longer have the best record in the league, but the fact of the matter is that Los Angeles has yet to play at a consistent level.

Yes, at times the Lakers have looked marvelous. And yes, they have pounded teams because of their height, depth, talent and experience. But this is professional basketball, and they are the two-time defending NBA champions. What does this mean? Every team in the league is aiming to beat them on any give night that they compete.

Pau Gasol, arguably an MVP candidate thus far, has been playing a lot of minutes. And so has Lamar Odom. In order to re-establish themselves with the best record again, the Lakers need to focus on effectively and efficiently managing Gasol and Odom’s minutes. This is truly necessary since center Andrew Bynum has yet to return from injury.

Unbelievable as it may sound, both players have been on the court longer than Kobe Bryant. Once the Lakers get Bynum back, the remaining big men will find more sufficient rest, particularly for the long run in this lengthy and draining campaign.

As soon as the big men receive their proper rest and appropriate minutes on the floor, more defensive production will evolve. More importantly, however, both Gasol and Odom can concentrate on cultivating additional danger in the paint, offensively. Until then, the Lakers will not consistently find their groove back.