Louisville Drops UCLA Out of Tourney 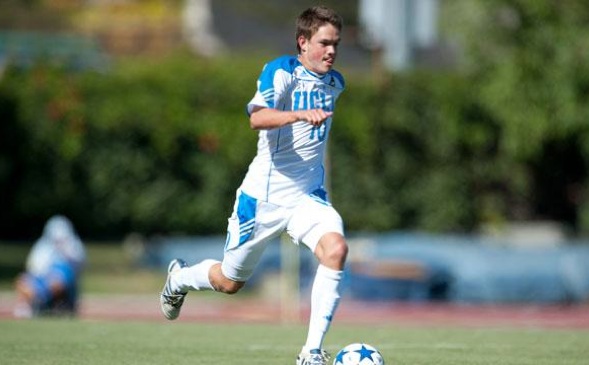 With the shootout loss, the eighth-seeded Bruins (16-5-1) fall out of postseason contention while the top-ranked Cardinals (19-0-3) advance to the semifinals against fourth-seeded North Carolina.

UCLA began the affair in strong fashion when junior midfielder Eder Arreola beat the Cardinal goalkeeper from seven yards out and fired a shot into the back of the net. A 2-0 edge was then gained at 17:11 as freshman midfielder Kelyn Rowe deposited a free kick from just outside the box and into the lower left corner.

However, the two-goal advantage did not last long since Louisville netted their initial score at 28:21 on behalf of Colin Rolfe, but UCLA’s Chandler Hoffman returned the favor with 32:50, making the score 3-1. The Cardinals’ Charlie Campbell scored on a penalty kick a few minutes before halftime, putting the game at 3-2.

The Cardinals went on to collect two additional scores by the 56-minute mark, taking a 4-3 lead. With 10 minutes remaining in the game, the Bruins’ Victor Chavez gained his 10th goal of the season to knot the score at four all. Chavez scored off a throw-in, and Joe Sofia received the assist.

Being at home in a familiar setting helped the Cardinals in the last minute of play; with 52 seconds left in the contest, Aaron Horton dribbled past the UCLA defense before blasting and scoring the game-winning goal.

UCLA junior goalkeeper Brian Rowe managed to make seven saves for the game on a night in which the Cardinals produced 20 shots, including 12 on goal. The Bruins had 18 shots, while Louisville goalkeeper Andre Boudreaux made five saves.

With the thrilling victory, the unbeaten Cardinals placed themselves in the College Cup that starts on Dec. 10 in Santa Barbara. Meanwhile, UCLA’s remarkable run comes to an end.

Soccer
US women's soccer team is back on big stage, and America loves it
1,240 views