Inception, The Expendables and More 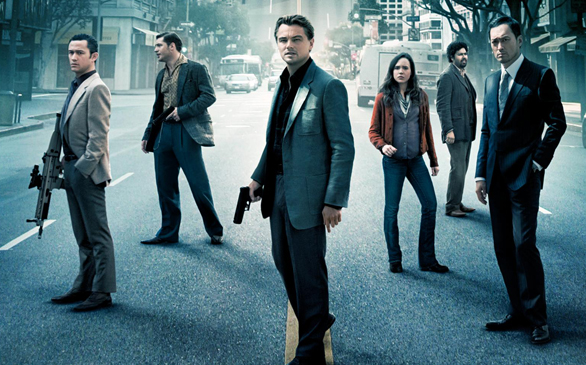 The Majors: The most jaw-dropping film since The Matrix, Christopher Nolan’s Inception is a mind-bending Escher drawing of a film. Leonardo DiCaprio stars as a corporate spy who goes inside peoples’ dreams to extract secrets or implant ideas.

The Disappearance of Alice Creed is a taut and twisty British thriller about two men who outfit an apartment to hold a woman for ransom.

Stranger Than Fiction: Two fascinating documentaries take you behind the scenes at Disney. Waking Sleeping Beauty covers the renaissance that began in 1984 and led to a string of classic films. The Boys: The Sherman Brothers’ Story profiles the Oscar-winning songwriting team behind countless classic songs from films like Mary Poppins.

Harlan: In the Shadow of Jew Suss profiles Joseph Goebbels’ go-to filmmaker Veit Harlan, director of the most infamous propaganda film of all time, Jew Suss.

LENNONYC culls home movies, studio footage and interviews with Yoko Ono, Elton John and others for an intimate look at the legendary songwriter’s later years.

Over 80 stand-up comics, including Sarah Silverman, Jim Gaffigan and Louis C.K., describe life in the trenches in I Am Comic.

The director of Trekkies examines the ultimate question in The Nature of Existence.

The Idiotbox: Missed Pee-wee’s comeback stage show? Not to fear, you can relive all your favorite moments in Pee-wee’s Playhouse: The Complete Collection.

The eight-part miniseries adaptation of Ken Follett’s historical tale of love and political intrigue, The Pillars of the Earth, stars Ian McShane, Donald Sutherland and more.

Idris Elba (“The Wire”) stars as a detective in BBC America’s Luther.

Cory, Topanga and the gang tackle their final year of high school in Boy Meets World: The Complete Fourth Season.

Lennon Naked is a dramatization of the Beatle’s turbulent journey spanning 1964-1971.

In Toon: Fantasia and Fantasia 2000 come to Blu-ray in a four-disc set, which includes Salvador Dali’s long-unfinished short Destino as well as a slew of extras.

Under the Radar: The Sicilian Girl is the true story of a girl who defied the Sicilian Mafia’s code of silence.

Valhalla Rising is a hypnotic, nightmarish Viking film from the director of Bronson.

The Vault: The Bob Hope Collection contains five of the legendary comedian’s films, including The Lemon Drop Kid, Road to Bali, Road to Rio, My Favorite Brunette and The Seven Little Foys. James Cagney, Peter Lorre and Bing Crosby co-star.

Blu Notes: Neo holiday classic Elf comes to Blu-ray in the Ultimate Collector’s Edition. The set is packaged in a collectible holiday tin with a soundtrack sampler, stocking, magnetic picture frame and more.