The Chronicles of Narnia: The Voyage of the Dawn Treader: A Swashbuckling Trip Aboard a Royal Ship 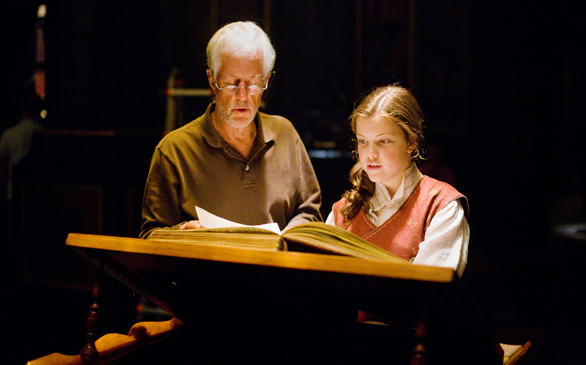 Director Michael Apted & Georgie Henley on the set of the new The Chronicles of Narnia movie
(Credit: Phil Bray)

As the weather turns cold and holiday shoppers flock to malls across our great nation, it’s time to return to a magical place where a mighty Lion with Liam Neeson’s rumbling roar rules and wee tykes can escape air raid sirens in London in favor of hand-to-hand combat with minotaurs and a wicked White Queen. Yes, Virginia, there is a Santa Claus, and he’s brought us a new chapter of The Chronicles of Narnia saga.

When audiences last saw the Pevensie kids, Prince Caspian (Ben Barnes) was named King of Narnia as the two oldest siblings, Susan and Peter, were told that they’d learned everything they could from the magical land and would never return. In The Chronicles of Narnia: The Voyage of the Dawn Treader, the third installment of the mega-successful franchise based on C.S. Lewis’ beloved children’s books, the two youngest Pevensies, Lucy (Georgie Henley) and Edmund (Skandar Keynes), find themselves transported back to Narnia with their whiny, naysaying cousin, Eustace Scrubb (Will Poulter), where they meet up with Caspian for a swashbuckling trip aboard Narnia’s royal ship, the Dawn Treader.

Poulter, who made an impressive debut in 2008’s Son of Rambow and is sprouting into a British amalgamation of Leonardo DiCaprio and Lucas Black, will inherit the mantle of Narnia from Henley if a fourth film is made (which it surely will). Sitting down to speak with the two young actors, one at the end of their Narnia tenure, the other just beginning, both are effusive about their admiration for the source material they got to work with.

“I loved the book,” Henley enthuses of Dawn Treader. “It’s my favorite in the series, so that inspired me to work really hard but to take what I loved and try to recreate it on film. I also wanted to use all the stuff I’ve learned on the other two films and use it to give Lucy a good farewell; send her off in style, hopefully.”

“Having not done the first or second [film], I was a bit apprehensive about coming into this new thing and this already tightly formed group of friends,” Poulter begins. “The greatest inspiration for me was the book itself. Everyone stayed very true to the book; the director insisted on that.”

Also new to the Narnia juggernaut was director Michael Apted (Gorillas in the Mist, Coal Miner’s Daughter) who took over for Andrew Adamson, the man behind the first two Narnia films.

Asked how Apted compared to Adamson, Henley replies, “It was different but it wasn’t better or worse. It was great for me to work with a different director because I’ve only ever had Andrew to work with. I think it’s good to experience new directors because that’s the way the acting world works. You can’t work with the same director your whole life.”

“He was a real actor’s director too,” Poulter chimes in. “He really understood the characters and all of our ideas sort of clicked with his. He’s such a prestigious figure in film; the option to work with him is an honor, especially when you’re as young as we are. The chance to work with a director like that is something that most actors would kill for and, as kids, that’s something we don’t take for granted at all. We’re very grateful.”

One of the great things about the Narnia films is, even though there are both covert and the overt religious themes and overtones to the story, they never smack viewers over the head. It’s a fine balance to strike and one Henley is quite proud of.

“It’s what we’ve always set out to do,” she says. “The books are classics, and they appeal to so many people. I don’t understand why people would try to think it’s sidelined to a certain audiences. There are themes that if you look for them, you’ll find them, of course you will, that’s the way C.S. wrote the books, but I’m glad they’re not forced on you. My faith is ambiguous, and I watch the films and I don’t get any pressure to see something I don’t want to see. I think that’s really important.”

“If anything,” Poulter adds, “it broadens the audience Narnia appeals to. [The films] transcend the boundaries of religion.”

The Chronicles of Narnia: The Voyage of the Dawn Treader releases in theaters Dec. 10.